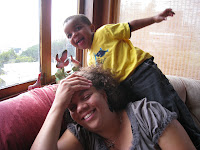 Too early to get up. Four in the morning. It's dark outside and fog envelops the house. It is about twenty-four hours before giving birth to my first baby. I've had visions of feeling contractions, of water breaking, while in the comfort of home, and of walking the hills until my dilation sends me to the hospital where a midwife will keep post over me. I've had visions of a natural birth where I push and labor until my partner catches the child and cuts the cord, and no doctors wheel my daughter away for tests.
My plans have gone awry from having a natural birth sans drugs, to having a scheduled C-section due to the baby's obstinate transverse position across my pelvic bones. I fear the labyrinth of hospital red-tape, the medical bureaucracy, the recovery of the body. I'm still coming to terms with the notion of the cosmic crapshoot, that a strong will can be bent by the decisions of others, particularly that of a tiny baby whose tangible signs of life are ripples and flutters under my skin. It is a questionable irony to feel in control of another--the one you conceived with your partner--and find out that their phantom movements are more powerful and shape-shifting than your own brawn.
I was born on a renovated World War II tanker off the coast of Florida to a father who delivered me and a mother who smoked cigarettes between contractions. "So your birth makes a good story," says my mom when I cried to her the other day about fear of going under the scalpel. "So what?" She and my dad desired to be on the open sea during my birth; but if they were, things would be far different in my life now. The placenta that nourished me never came out on its own accord, and so my mom began to hemorrhage; luckily the ship was moored at the port of Jacksonville, and it was a short drive to a hospital for sedation, scraping, and recovery.
Still, it is hard not to feel confused in the face of information and advice coming my way: an article about "orgasmic moms" in the local, free paper Common Ground; a British magazine article called "Hippie Mama" about Ina May Gaskin's midwifery experiences in rural Tennessee. My big sister Tanya--a strong-willed, politically charged woman-- gave birth to her son Kekoa exactly the way she wanted it, forsaking drugs and medical interventions, even through the agony of perineal stitching at the end of the experience. She called me yesterday to assure that my daughter will be here soon, and that her health is of more importance than the method in which she enters this world.
I don't plan to post writing like this, of such a personal nature that perhaps leaves too much exposure, and thus a possibility for feedback I might cringe about.  I try to focus on the not-so-distant future of hiking the hills and exploring the neighborhoods of San Francisco with my daughter in a sling or a stroller, and of disseminating information about outdoor places to go in a day's jaunt, of cafes where you don't have to wield diapers on the bathroom floor, of hidden spots where a parent and child in the city can still feel grounded, connected to the earth.
In the time being my focus is myopic. "When you see her face," my sister told me, "it will all be worth it. It'll be your birth story and it'll be great." I shall keep those words in mind and heart. Thank you, Tanya.
Posted by Unknown at 6:04 AM No comments: Links to this post

Labels: cesarean, hippie mom, Ina May Gaskin, natural birth
Newer Posts Older Posts Home
Subscribe to: Posts (Atom)
No city should be too large for a man to walk out of in a morning. ~Cyril Connolly