A Stroll with the Living and the Dead:

Bringing Baby to the Cemetery 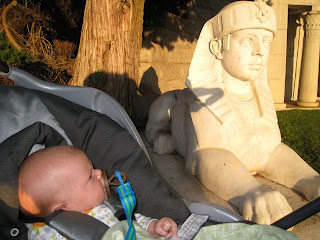 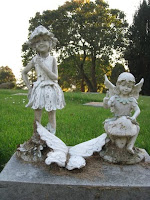 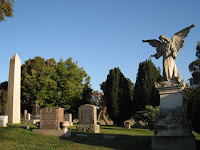 Arriving at Cypress Lawn Memorial Park with my baby this afternoon for a stroll after a doctor appointment in a nearby clinic, we were a few days overdue for both the a propos Halloween and Dia de los Muertos, but with perfect timing to have the place to ourselves (save for the maintenance men in white pickups who cruise the grounds, and a family feeding ducks and geese at the pond in the east entryway off of El Camino). It had been over a decade and a half since my first visit.  I remember traipsing around as a high school student, accompanied by my Gothic friend Amelia who draped herself across concrete angels while I wielded a Pentax K 1000 camera and a roll of black and white film. Fast-forward to my mid-20s when I moved to within walking distance of the cemeteries, and my housemates and I went once or twice to trespass, drink wine, and get pleasantly spooked. Now in my more sober thirties I sport a baby and, I guess, a mildly odd sense of aesthetics and exercise. 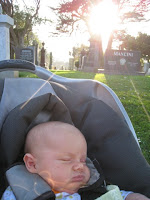 Today was a gorgeous day and the late afternoon so warm that I left my sweater in the car. This cemetery is perhaps a perfect place to walk with a stroller: wide, paved roads have minimal traffic and loop up a steep enough incline that I felt I had a fair to middling post-cesarean workout without straining my stitches.  I grew somnambulant from the sunny clime and felt I could fall asleep on the sweeping lawns studded with tiny daisies  (except I didn’t; perhaps I’m warped from my German grandmother’s admonition of maintaining appropriate behavior otherwise, she said, after she died she would push a hand out of the earth to point an accusatory finger if I visited her grave). 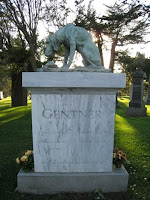 My baby and I took a circuitous route and marveled at the pyramid-shaped tombstone, the concrete dog, the Egyptian Sphinx, the countless Angels. We pondered life and death (well, at least I did whereas the baby, with synapses firing, might’ve noted the pleasant vibrations of the stroller). I considered our ancestors, our parents, and the baby’s family tree; with every beginning there is an ending, and then a new beginning. It is not so much a note of sadness as a reminder that we live once in this lifetime, no matter whether we believe in reincarnation or the laws of physics that say energy cannot be destroyed or created, that it only changes form.  Kahlil Gibran wrote, “If you would indeed behold the spirit of death, open your heart wide unto the body of life. For life and death are one, even as the river and the sea are one.” I keep my eyes open, appreciate each moment, revel in the existence of my daughter, and thank those that came before us, who ultimately gave us life. 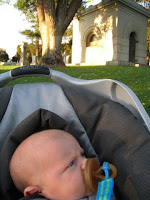 We wandered around, noting names and dates. History resonates in any cemetery, and Cypress Lawns vibrates with famous and colorful characters: Hubert Howe Bancroft (1832-1918), a man with seriously impressive muttonchops and handlebar moustache, whose extensive book collection became the foundation for the Bancroft Library at UC Berkeley; Arthur Brown Jr. (1874-1957), an architect involved in building San Francisco’s City Hall, Coit Tower, Opera House, War Memorial Veterans Building, and the Transbay Transit Terminal; Charles de Young (1845-1880),  of the Chronicle newspaper and the San Francisco art museum; John McLaren (1846-1943), the nature lover who transformed a desert of sand dunes into Golden Gate Park; the Hearst family, beginning with the patriarch, George (1820-1891), who trekked with his wife from Missouri to California, made a fortune in mining precious metals, and started the Examiner; the Hearst matriarch, Phoebe (1842-1919), a woman interested in archaeology, anthropology, and education, who donated $21 million dollars to philanthropic causes; the most famous Hearst, the media mogul William Randolph (1863-1951); and my favorite local celebrity, Lily Hitchcock Coit (1843-1929), also known as “Firebelle Lily,” rescued by firemen from the Knickerbocker Engine Company when she was a ten-year-old living on Telegraph Hill, and who ultimately donated an impressive $100,000 to build the Washington Square Monument and Coit Tower. The affluence and prestige of the interred make this cemetery top-notch in terms of looks and history. 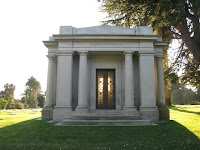 The only drawback to Cypress Lawns is the nearby shooting range that, of course, makes a thunderous racket. (Another drawback might be the maintenance men in their white trucks who sometimes gave me funny looks as I posed my baby in her carriage next to a particularly cool crypt.  Ah, did I feel like a weird San Franciscan in those moments!) 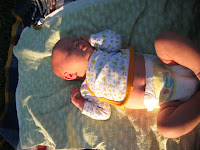 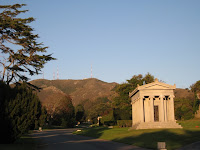 The baby and I headed in the direction of San Bruno Mountain, which was a lovely golden-green from the recent rain, reached the edge of the cemetery, and made our leisurely way downhill.  We stopped to throw a woolen blanket on the lawn (making sure there was no grave underneath) to do a diaper change.  How pleasing that baby could be free and naked in the sunshine! And when she decided to wail and fuss, there wasn’t anyone to bother.  We got back on track, stopping here and there so I could jot down a cool name from a 19th century tombstone, while baby glared over the edge of her binky at the different statues. The shadows had grown long and dramatic by the time we reached the car, surrounded by honking geese. The late afternoon is perhaps one of the best times to visit as you have the sun setting over the trees in the west, the intense angle of light in the necropolis, and San Bruno Mountain is lit up in the east. 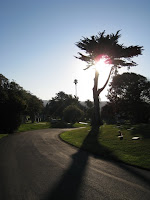 On a final baby-related note, if you are in need of diapers or a toilet (with a baby-changing table), Babies R Us is half a mile away. I must warn you that every time I go to that store, I am surprised by the restroom’s filthy state. Given the options, I would rather change my baby under a craggy old cypress next to a marble tombstone on any day. 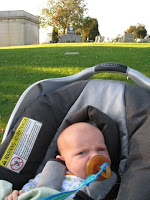 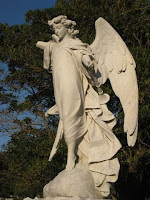 Labels: baby, cemetery, Colma, Cypress Lawns, odd, San Francisco, urban hike
Newer Posts Older Posts Home
Subscribe to: Posts (Atom)
No city should be too large for a man to walk out of in a morning. ~Cyril Connolly