Sunday Streets: No Cars, Just People on the Embarcadero 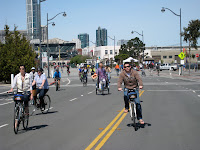 Sunday was a beautiful day with the sun shining on the Bay Area and such good air quality that the silhouette of Mount Diablo stood out clearly on the eastern horizon, even from my vantage point in San Francisco. Best of all it was a designated “Sunday Street” day, where San Francisco shuts down a long section of road to motor vehicles, opening the street for pedestrians, bicyclists, strollers—anything powered by legs, feet, and hands. 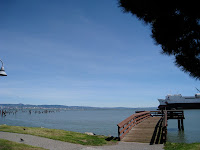 The selected stretch was mostly along the Embarcadero, starting in quiet China Basin, south of the ballpark, all the way to frenetic Pier 39. From end to end it was 3.8 miles. Even if the streets weren’t closed to cars, the walk is great with a constant view of the bay and the Oakland hills in the distance. There are green, grassy spots and play structures along the way for the children, public restrooms, and some cool, funky restaurants. As well, much of the route was part of the historic Barbary Coast Trail. 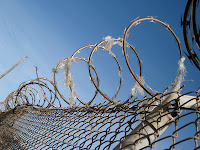 We began our walk at Mariposa and Illinois Streets, essentially on the backside of Potrero Hill.  My husband and I brought our baby in a stroller, and took sunhats, water, and carrot bread with my friend Jeannie’s homemade blood orange marmalade. Mariposa Street turns into Terry A. Francois Boulevard, curving along a waterfront, juxtaposing fishermen on old docks with razor wire on cyclone fences. But it was cool, immediately seeing people on bikes in the middle of the road. We’re so used to being watchful for cars, it took some time getting used to being in the middle of the road.
In the distance was the Bay Bridge. We mused, if we make it there, that’d be great. We didn’t think we’d walk all the way to Pier 39.
We walked on down Terry Francois Boulevard to where it doglegs to the left at Pier 48, the first green, grassy patch. Children were shrieking and sliding and jumping in an inflatable, plastic castle. 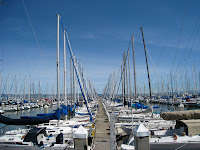 The route then connected with 3rd Street, at Mission Creek, locally known as Shit Creek, as least by my old-time San Franciscan friends.  We crossed the 3rd Street Drawbridge, my husband musing about what it would be like to live in the tiny office above the road. 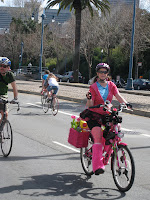 The route continued along Willie Mays Plaza, on the cold side of the ballpark, but we hugged the water’s edge on the Barbary Coast Trail, named for the old red-light district in the days of the 49ers, now a trail made of concrete. Whooshing by came a bald and bearded man, his bike weaving happily, his sound system blaring a song by Musical Youth:
It was a cool and lovely breezy afternoon
(How does it feel when you've got no food ?)
You could feel it 'cause it was the month of June
(How does it feel when you've got no food ?)
So I left my gate and went out for a walk…
He was the Pied Pipers of bicyclists, with a throng behind him, including a Burner woman in hot pink, blowing bubbles. 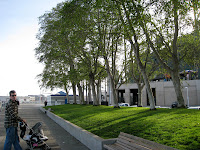 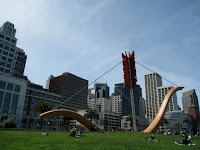 The rest of the walk was the Barbary Coast Trail, running parallel and just east of the Embarcadero. The northbound lane of the street was closed to motor vehicles. Now people were out en masse.  Martial arts practitioners flipped each other around at the diamond-shaped Rincon Park, also known as Cupid’s Span because of the enormous sculpture in the middle of the lawn of Cupid’s arrow piercing the heart of the City. 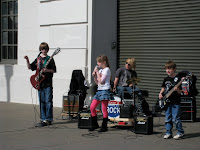 We stopped at Tcho, a chocolate company, and tried free samples, preferring the darkest chocolate. We wandered through the Ferry Building, loving the smells of cheese and coffee (there’s a public bathroom here, by the way).  We meandered down the open road, noticing that anyone with a sound system strapped to their bicycle invariably had a following of people behind them—everyone likes a song. And more power to the busker’s on the sidewalks! There was even a band of kids, Exit to Rock, belting out Clash and Ramone’s covers. 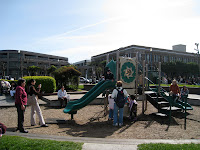 Finally, just as the Embarcadero was opened to motor traffic at 3:00 in the afternoon, and the wind was beginning to blow, we reached Pier 39 and the Aquarium of the Bay. We sat and ate the last of our carrot bread, savoring the delicious marmalade. When we were leaving we noticed a modest playground, right alongside the water. 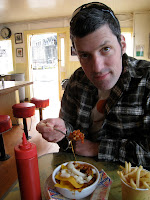 We decided to walk the whole way back, although we were tired and the baby got grumpy. We stopped for a rest and a bite at a very cool diner on the water, Red’s Java House, just south of the Bay Bridge. The homemade chili and beans, topped with huge chunks of cheese and wedges of yellow onion, was under $3; the cheeseburger bun was a fair hunk of San Francisco sourdough. I met a young, very pretty woman in line for the bathroom, drinking Pabst Blue Ribbon, who yammered about the great price of beer. “You can get a bucket of six beers for cheap!” she shrieked. 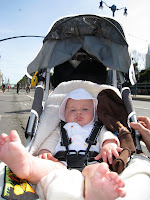 By the time we got back to where we began, our dogs were barking, the baby was sleeping in the stroller, and a crisp wind was blowing. We were still excited from the walk—that we went the whole route and back, the discovery of some places new to us, and the fact that there are a half dozen more of these car-free Sundays to come.
What and Where?
Sunday Streets Website
http://sundaystreetssf.com/
Tcho Chocolate
http://tcho.com/
Red’s Java House
Pier 30 (Bryant & Embarcadero)
(415) 777-5626
http://www.yelp.com/biz/reds-java-house-san-francisco
The next Sunday Street is April 11th, going along the Great Highway and through Golden Gate Park. 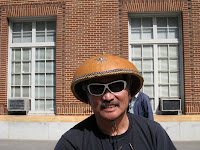 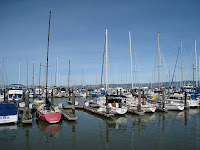 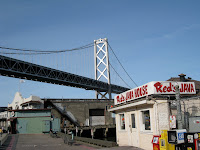 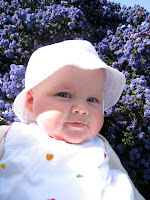 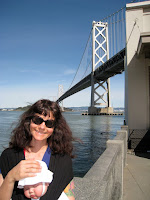 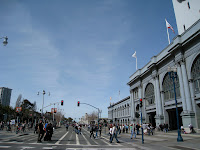 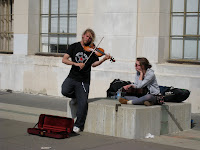 Posted by Unknown at 1:48 PM No comments: Links to this post

Labels: hiking with children, Red's Java House, San Francisco, Sunday Streets, Tcho, the Embarcadero
Newer Posts Older Posts Home
Subscribe to: Posts (Atom)
No city should be too large for a man to walk out of in a morning. ~Cyril Connolly