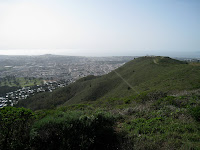 Marshall got off work early by a couple hours on Tuesday, so I picked him up from downtown San Francisco and we drove to San Bruno Mountain, just south of the Daly City border. We’d try a new path for us, the Summit Loop Trail, a 3.1-mile journey circling the top of the mountain.

San Bruno Mountain is one of those places close to The City that also feels far away because it has wild animals, rare plant species, and the feeling you could almost get lost. (It’s absolute insanity that developers once considered chopping the top of the mountain off to use as landfill!) It’s a five to ten minute drive from downtown San Francisco, and walkable from Daly City, where I used to live. 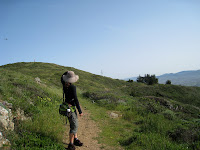 The mountain is located at the northern end of the Santa Cruz Mountain range and peaks at 1,314 feet with views in every direction— Mount Tamalpais to the north, Mount Diablo to the east, hills and mountains of the southern peninsula, and the Pacific Ocean to the west, where the horizon traces the curve of the earth. Deep ravines fissure the sides of the mountain and create all sorts of mini ecosystems, harboring at least fourteen endangered plants and butterflies. 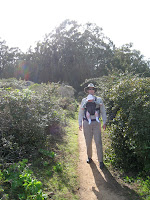 We parked at the second lot, beyond the underpass, put the baby in a sling that her daddy wore, and started walking up the mountain on the Summit Loop Trail, quickly leaving behind a grove of eucalyptus trees clustered around the parking lot. It was late afternoon but still sunny.

The trail switchbacked a mile to the peak, but the elevation change was gradual. A child could manage this. As this was the north side of the mountain, the plant life was dense with bushes and the wildflowers were like colored bits of confetti on either side of the trail.

Suddenly Marshall spotted a large, golden-colored cat about 150 yards away, across a ravine! I’ve never seen a mountain lion before, and if this was one, it was a juvenile male as he sauntered in the open, his long tail quivering as he sprayed some bushes. He looked about 2-3 feet long, with a tail of equal length, and appeared much like a lioness. His golden pelt contrasted with the green bushes. We watched as he walked downhill, sprayed, crouched to pounce at something in the grass, and then pad along another trail (we think it was the Dairy Ravine Trail). We talked about what to do if we saw a mountain lion right before us: make ourselves look big, slowly back away, holler and yammer. But maybe it was just a Perry the Refrigerator of a housecat. If it was a mountain lion, I feel blessed to have seen one. 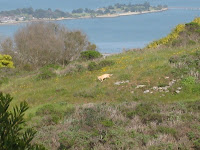 Nonetheless, I later contacted San Bruno Mountain Watch, and they directed me to contact the ranger, Mr. Albert Zucker. Apparently, a mountain lion was sighted on San Bruno Mountain just a month ago. Two years ago, CBS really blew news out of proportion about a lion on the mountain, acting as if a serial killer was on the loose; a more levelheaded article from The Examiner pointed out that species might be returning, including a rare deer. We would only be so lucky to have our wild animals come back. And the wild animals, may they survive and live long lives on the mountain, considering they’re surrounded by a sea of concrete, traffic, and aggressive human beings. 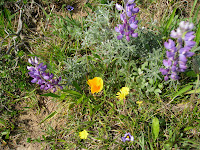 We continued up Summit Loop Trail and crossed the emergency access road twice at the peak, where there are some radio towers. From then on the trail gently meandered two miles downhill, going into a ravine with a creek, April Brook, flowing through it. The flora changed depending on the exposure—we saw Indian paintbrush, ceanothus, coffee berry, and California poppies, purple irises, many different kinds of lupine, umbrellas of angelica, willow trees, and lots of poison oak, very fresh and oily. 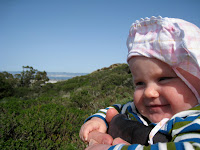 On our final leg, Marshall found an old, spent bullet on the trail. Idiots with guns are much scarier than any mountain lion.

We returned to the parking lot an hour and a half after we’d begun. It was close to sunset and there was a marine wind beginning to blow in. The baby had been awake and happy for most of the hike, but had fallen asleep, as she’s wont to do by the end of a hike, and we felt good. In all, Summit Loop Trail was truly beautiful, isolated, and accessible. Highly recommended!


For succinct articles about local hikes that are good for kids, consider a free subscription to SF Hiking with Children at examiner.com. 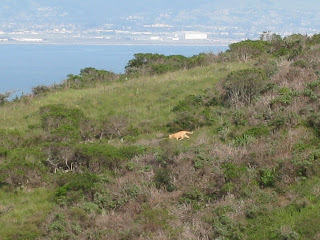 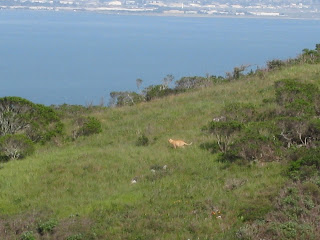 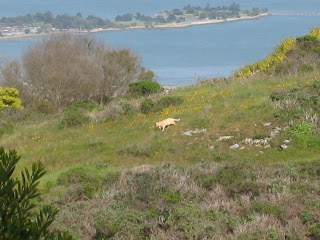