Word from the Lepidopterist I published a short piece on the Starr King Open Space in Bay Nature magazine's most recent issue: http://baynature.org/issue/apr-jun-2013/

Starr King Open Space on Potrero Hill in San Francisco was known as "the field" when I was little girl, growing up a block away. I used to walk my dog, Poi Boy, here, and play here after school, sliding down the hills with cardboard under my butt. Many years later I learned Starr King is a great example of San Francisco's serpentine grassland habitat, which fosters rare native plants, many in bloom right about now. (I'm also leading a hike/picnic here on Sunday April 7th, click here).

Shortly after the issue of Bay Nature came out with my little article, editor Dan Rademacher forwarded me an email from Liam O'Brien, a famous lepidopterist (famous to me as I've laminated his lavishly detailed brochure on San Francisco's butterflies and hung it on my wall over a year ago). I was thrilled! Wow, the Butterfly Man?! For a burgeoning amateur naturalist (me), I think Liam is tops.
Liam said I could share his original email about my piece on Starr King, so here it is!


Hey Guys -
Thought you should know because of my current issue of Bay Nature I set out for a piece of the city I'd never been too. Hard to imagine, but the fantastic Starr King Open Space had missed my radar. Margo Bors gloriously photography that accompanied the write-up made me jump on the 48 Quintara bus line ( how cool you guys even give directions...) Anyway, I got a little lost and had an amazingly encounter with a mammal for the first time in the city - a Striped Skunk (Mephitis mephitis) was behind a fence. I know that's not a good sign of health ( nocturnal creature in daylight = rabies? Myth?) Anyway, positioned my iPhone 5 between the mesh and was rewarded. What a beautiful pied creature! I Prayed not to be Sprayed. Down the street at Starr King, saw my only second population of Goldfields ( Lasthenia californica ) in the city. I believe the only other place in San Francisco for this Serpentine obligate is Inspiration Point in the Presidio. Thank you, Bay Nature! Liam O'Brien
San Francisco, CA
http://www.sfbutterfly.com 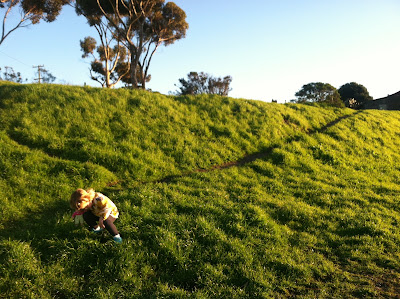 Posted by Unknown at 3:39 PM No comments:

Labels: butterfly, Liam O'Brien, Potrero Hill, Starr King Open Space
Newer Posts Older Posts Home
Subscribe to: Posts (Atom)
No city should be too large for a man to walk out of in a morning. ~Cyril Connolly