This past Sunday about thirty folks met up on the coastal stretch along Pescadero Beach. Some knew each other, and many were meeting each other for the first time. We walked a couple miles along protected marshland, binoculars in some hands, not knowing what we'd find. Soon kids were stopping to check out little things like bugs and flowers along the trail, adults were seeing blue herons and belted king-fishers in the trees, and though the sky changed from blue to cloud-covered in a couple hours, nobody minded--it was a great day to be outside. 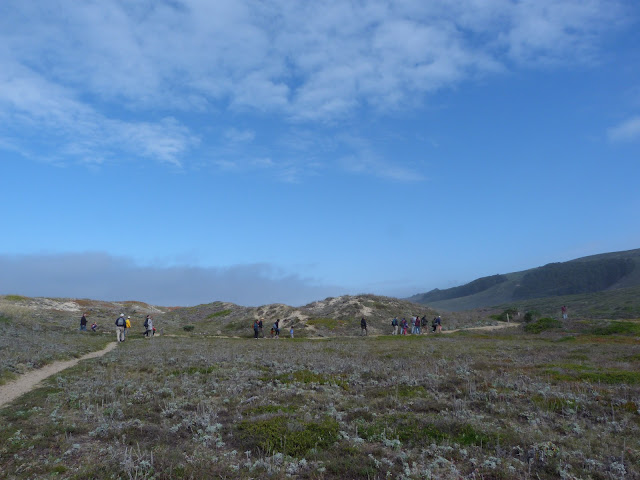 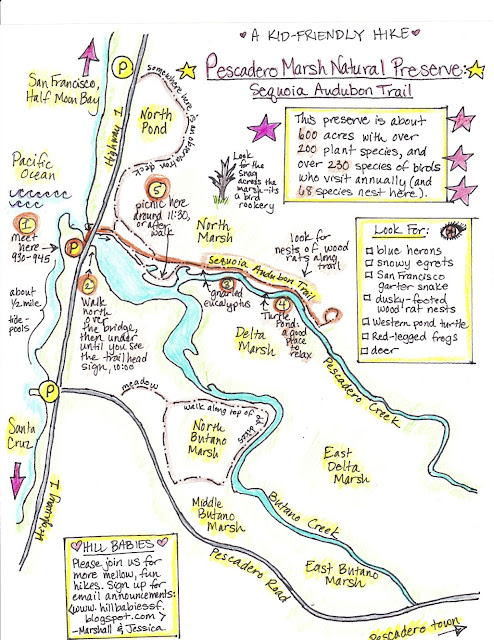 We passed out maps at the parking lot, showing the trail we were taking (in orange), plus a couple others if people were interested in other possibilities. 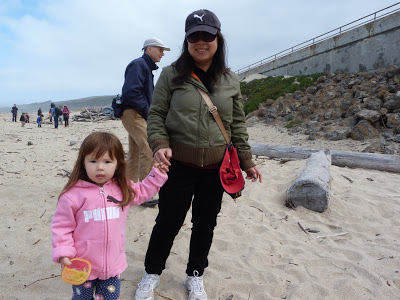 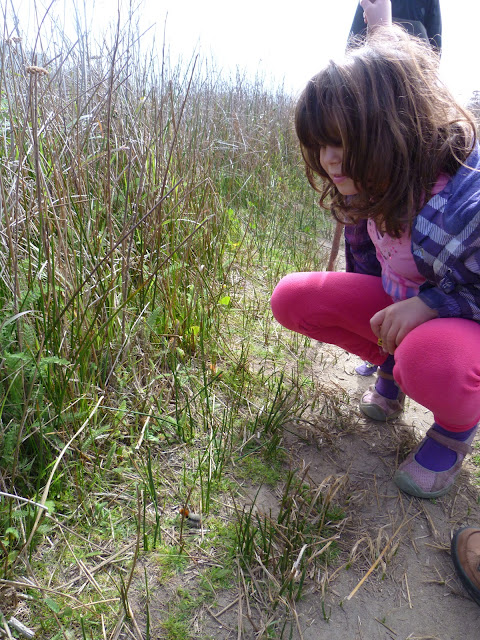 Once we reached the Sequoia Audubon trail, the kids were noticing things at their feet... 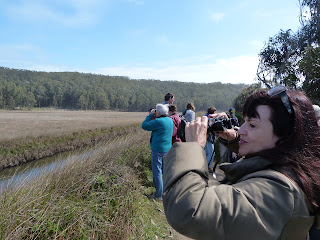 ...and the adults were seeing things in the distance. 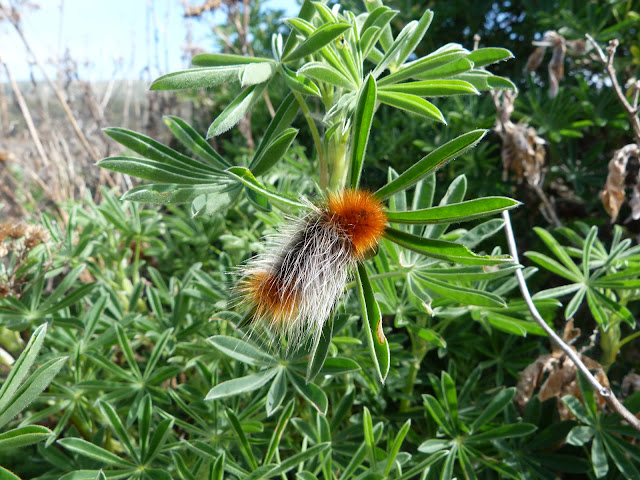 Someone identified this caterpillar---one of many of its kind---as a Wooly Bear that develops into a Tiger Moth. Don't touch it, we told the kids, it could cause a rash. The kids were thrilled by each and every one they found. This one is hanging out on a lupine. 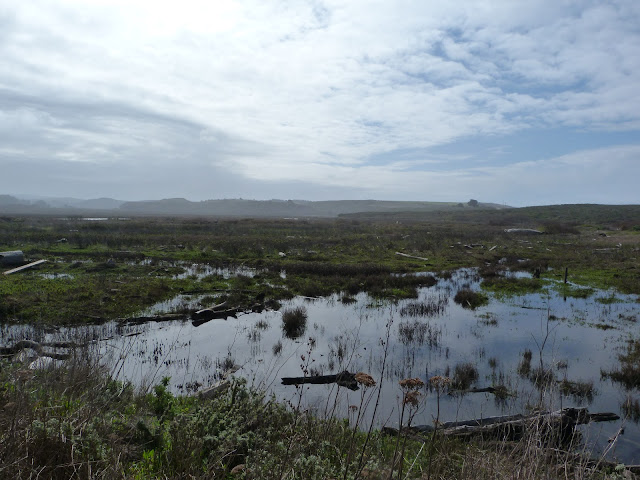 "We need the tonic of wildness, to wade sometimes in marshes..."
--Henry David Thoreau 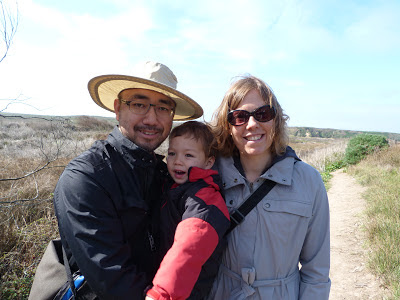 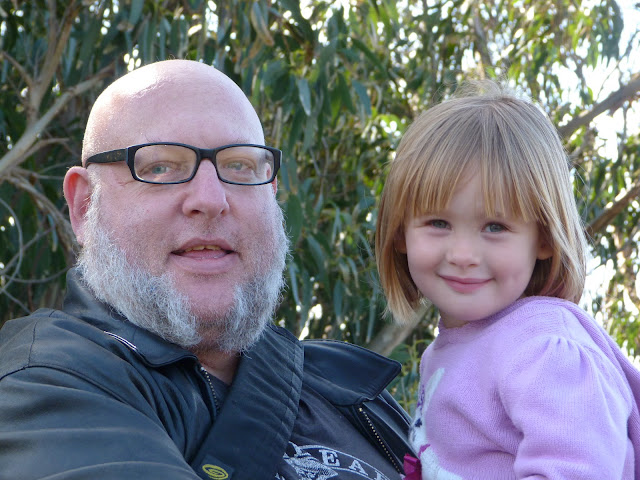 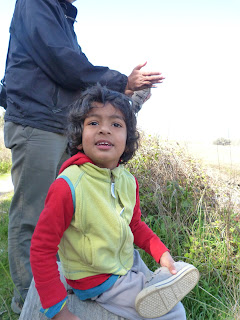 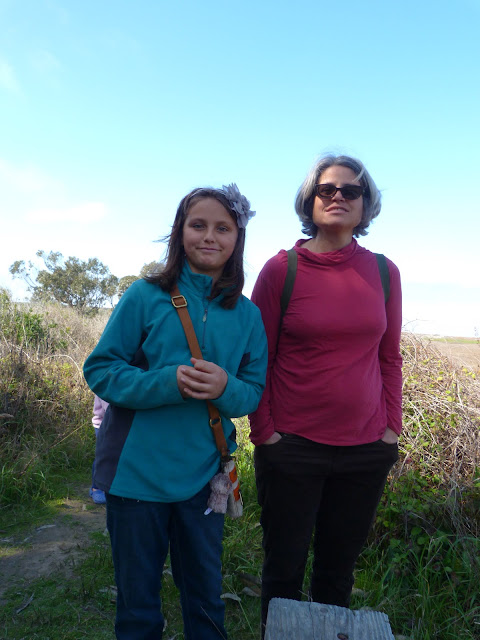 Mom and daughter--so glad they came! 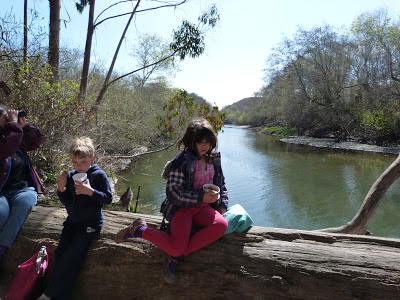 We took a snack break at Turtle Pond in the sunshine. 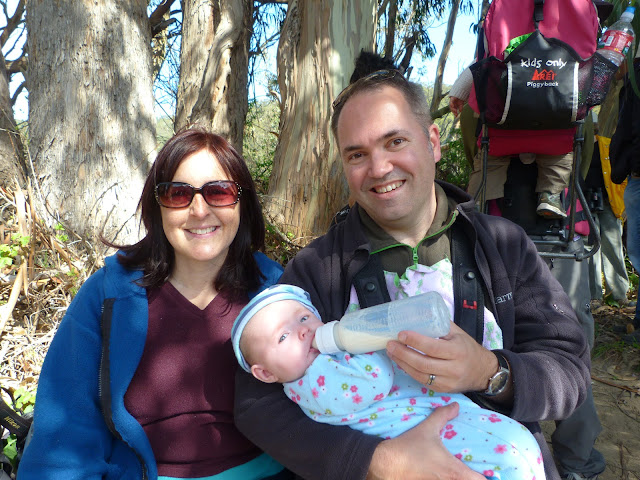 The youngest hiker in the group was a month. 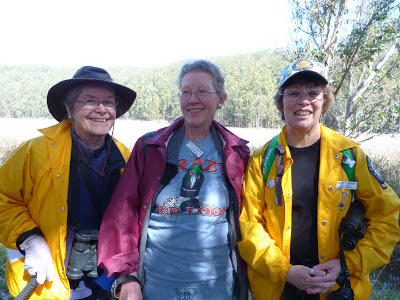 A handful of docents made our walk that much more fun. 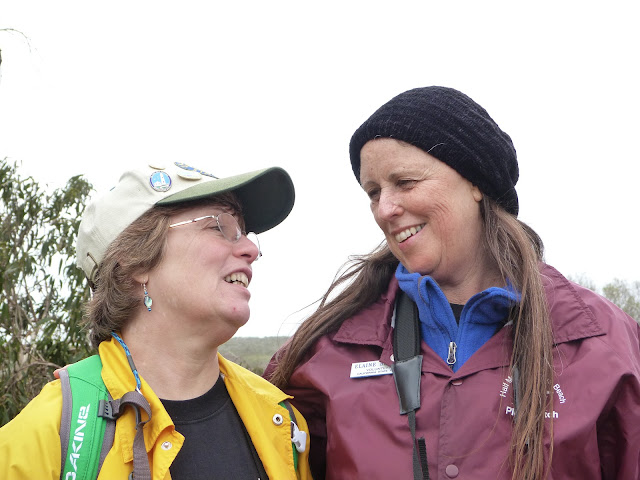 These naturalist volunteers seemed to truly love coming out here on a regular basis to take folks on informal hikes, and I've got to thank them for their dedication, knowledge, and good cheer. 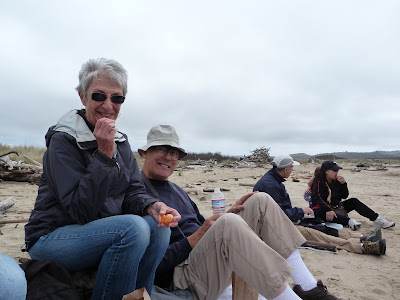 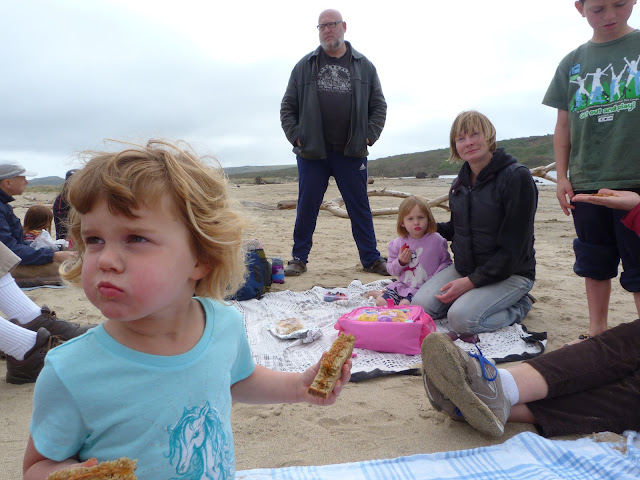 We had a picnic by Pescadero Creek, a perfect place with calm water, amazing amounts of driftwood, flocks of birds, and smooth sand. 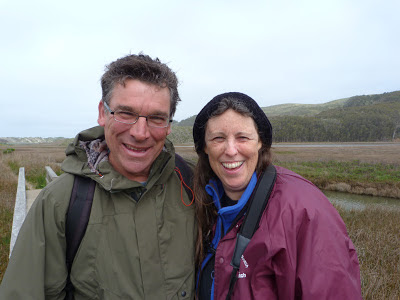 Two naturalists who happened to be childhood acquaintances that hadn't seen each other in over thirty years! Proof that going outdoors can be far more satisfying than staying inside. You never know who you'll run into when you join up with some group for a hike. 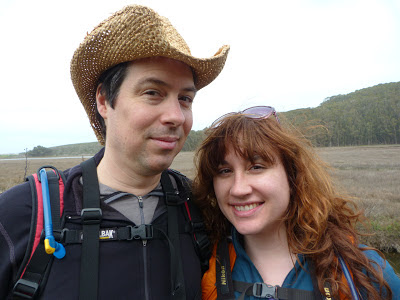 Bird aficionados and good friends of mine. 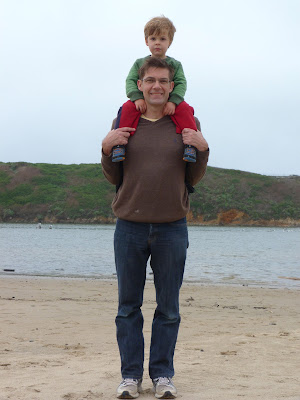 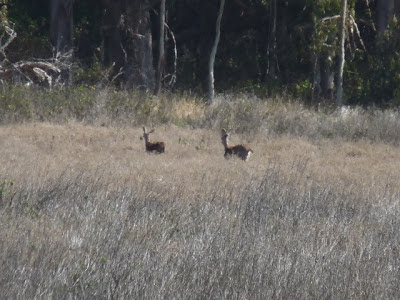 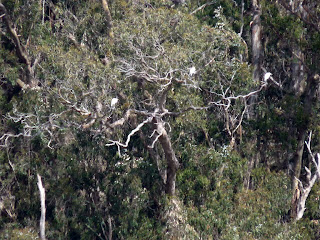 Egrets in the rookery, a big snag. 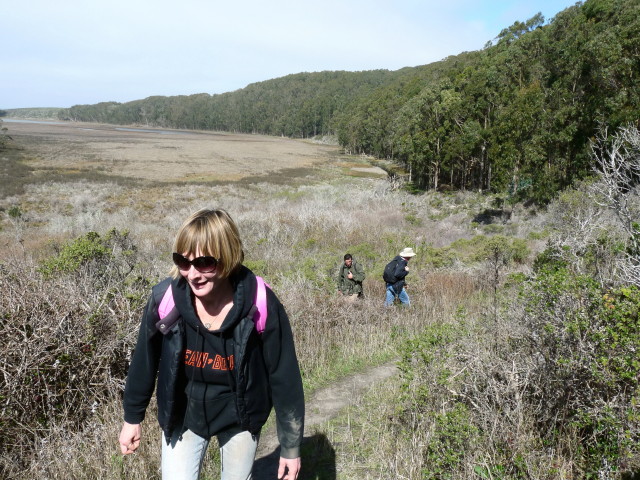 The end of the hike was at an elevated look-out at the top of a small rise, giving an expansive view of the marsh to the west and south. 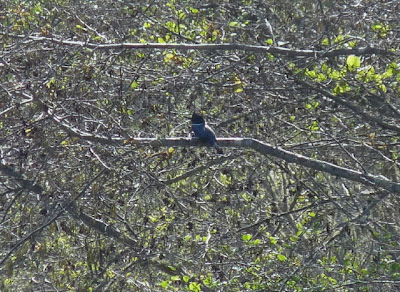 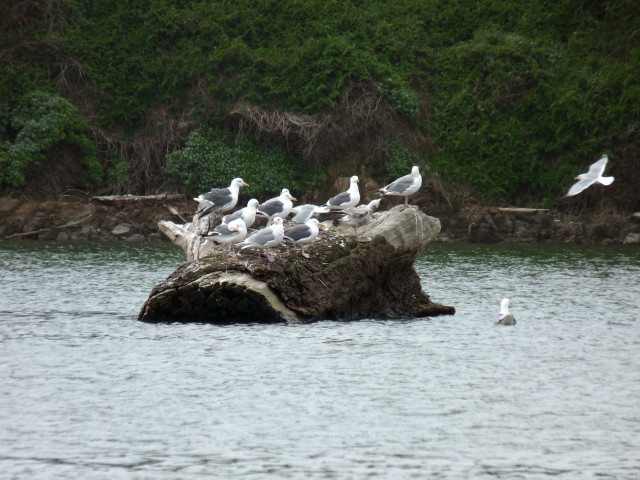 "To stand at the edge of the sea, to sense the ebb and flow of the tides, to feel the breath of a mist moving over a great salt marsh, to watch the flight of shore birds ....  is to have knowledge of things that are as nearly eternal as any earthly life can be."
--Rachel Carson 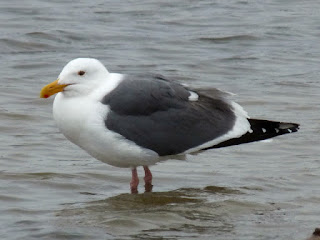 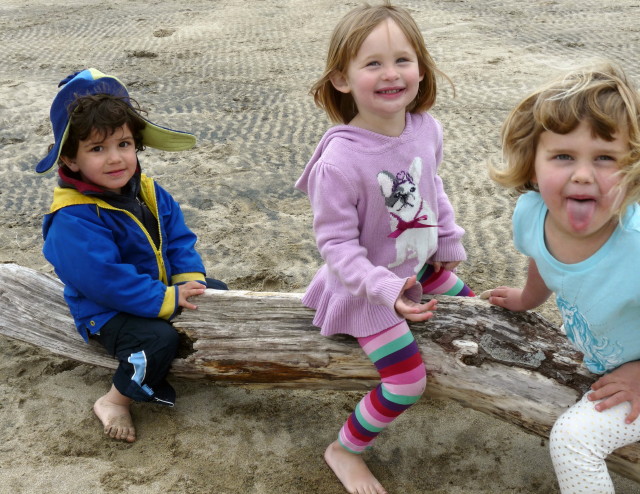 Note the lack of socks. Note the happy expressions. These kids were having a ball. That branch was a natural see-saw with someone on the other end (out of sight in the photo), so though you can't see em in action, they were on a ride that would rival any playground contraption.

Posted by Unknown at 9:30 PM No comments:

Labels: group hike, hiking with children, Hill Babies map, Pescadero Beach, Pescadero Marsh, wildlife
Newer Posts Older Posts Home
Subscribe to: Posts (Atom)
No city should be too large for a man to walk out of in a morning. ~Cyril Connolly