Not Lost in Berkeley's Tilden Park

On another cold-ass day in San Francisco, wind and fog blowing in off the Pacific right from the morning on, I set out with my baby hoping for a bit of East Bay sunshine. Tilden Park was the destination, and in that green, hilly swath, Lake Anza.

"You can get lost in Tilden Park," I sometimes tell folks, and their eyebrows always get crazy, one up, one down.  I was last in Tilden Park in my early college days, and I was lost all night long. Go ahead, laugh. I was with a group of friends, packing j's and beer, probably. We left the trail to climb a hill and stargaze. Of course we went wandering. We ended up walking for hours. We had no sense of direction. Where the hell was Berkeley? Then there was an enormous explosion, lighting up the sky, but *that* is another story. Suffice to say, Tilden Park is long and deep, and mysterious. 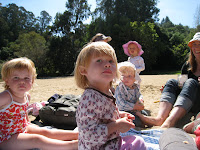 Advice to folks meeting there: choose an easy meeting spot--Little Farm, or Lake Anza. Cell phones struggle for signals amongst the big trees.

Back to Hill Babies. My momma friends, their toddlers, my toddler, and I planned to visit Lake Anza for a swim and picnic first, perhaps a walkabout. Then Little Farm, a kid-lovin' wonderland where you're encouraged to feel celery and lettuce to the animals (think big brown cows, curly-horned sheep, baby pigs, ducks, bunnies, chickens, goats). 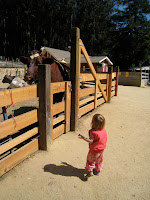 Lo and behold, the East Bay had sunshine, cloudless skies, and a brisk wind. Babies don't mind. They made a bee-line to the water's edge, those tiny aquatic monkeys, those baby humans. Itchy-snail larvae be-damned! (Yes. *Sigh* There was a sign we noticed later about "swimmer's itch" caused by tiny snails in Lake Anza--but no worries, nobody got it.)

One of my friends thought to bring celery, which certainly heightened the positive experience of Little Farm. It's interesting to note that toddlers who had pet dogs were much more at ease with the cows, for instance, compared to my daughter who loves a cow in a book, but tried to burrow into my neck at Little Farm when faced with the real deal. 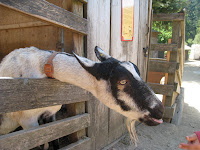 From a mom's perspective, Tilden Park is awesome for kids. Besides the countless trails, the swimming, the animals, other "features" include a steam train, a merry-go-round, an environmental education center, and botanic gardens. (Forget the damn golf course, seriously. Let the weeds grow.)

Happy travels, and know that if you get lost, don't worry--eventually you'll end up in Berzerkley.

Download Brochure
Open between 5 a.m. and 10 p.m. unless otherwise posted or permitted 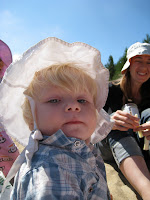 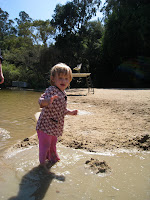 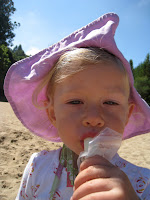 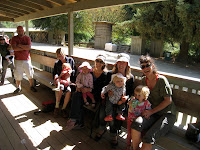 Labels: Berkeley, Lake Anza, Little Farm, Tilden Park
Newer Posts Older Posts Home
Subscribe to: Posts (Atom)
No city should be too large for a man to walk out of in a morning. ~Cyril Connolly