Once again Hill Babies leaves the San Francisco Bay Area for new trails, this time exploring the environs around Oxford, Mississippi in the Deep South. We came down because I was reading a short story at the Southern Writer's/Southern Writing conference. Unless a story has pictures, my Hill Baby just wants to hit the trail.

ROWAN OAK
The best indoor trail we took was wandering through the rooms of Rowan Oak, the home of William Faulkner in Oxford, Mississippi. On the self-guided tour one can learn all sorts of tricks to the master's trade, like how he scribbled notes upon the walls of his study, or his value to staying hydrated (in Faulkner's case, the man was fond of things stronger than just water), or that inspiration and elocution came easily in the soupy Southern heat (the day after Faulkner's funeral, by the way, his wife installed an AC unit).

My little Hill Baby stayed on my back through the tour; this is not a home for a stroller or a wild child. Although plastic blockades prevent visitors from bumbling into the rooms where all the furniture is, the views inside the rooms are great, and the memorabilia is original. Faulkner's daughter's room still has her riding boots, her storybooks, and two antique dolls on her mantel.
Children can almost be children on the grounds around Rowan Oak, at the English knot garden with its wisteria, or the stables Faulkner built in the Fifties, or passing through the columns of cedars, or in the pastures. Perhaps best for the Hill Babies types is the trail through Bailey's Woods.

HIKING BAILEY'S WOODS
The path through Bailey's Woods is about half a mile to two-thirds of a mile, there and back. The trailhead is marked at the Rowan Oak parking lot, and will lead you to the campus stadium. Even when Rowan Oak is crowded with visitors, this trail seems underutilized--we were the only people on it when we walked there.

Beyond peaceful, only noisy from the insects, the trail was serene in the dappled light under tall trees. My baby was totally sweaty on my back, much like an overgrown, hot little monkey, but she presently conked out in the heat. Although she didn't get to appreciate the hike, my husband and I loved it. We walked across undulating land, riddled with chunky tree roots breaking through the sandy soil, and over a dry creek (a great place to explore, by the way). People like to complain about the Mississippi heat, but even in the middle of July, the air is noticeably cooler in Bailey's Woods.

STAYING IN OXFORD
We lodged at the Inn at Old Miss, right on the University of Mississippi campus. It's quite pleasant to be so close to a large wooded area, and who can complain about the free breakfast (oatmeal, grits, fruit, cereal, juice, coffee, etc)? There are also baby cribs if needed. The Inn is about a third of a mile walk to downtown Oxford through the historic Depot neighborhood--highly recommended to stroll through in the evening when the sunset goes on and on, the lightning bugs come out, and you're destined for a gut-bomb of a Southern dinner.
EATING IN OXFORD
Our favorite Southern dinner in downtown Oxford is at Ajax Diner. There are comfy booths, but nobody cares if children sit at the bar, and after the meal, you're encouraged to shoot a toothpick through a straw at the ceiling. (Note to parents and guardians: try a Bloody Mary, and eat the fried catfish with sides of sweet potato casserole and fried okra--YUM!) And if you have second thoughts about shooting a cocktail toothpick through a straw, you really need to try a Bloody Mary; recall William Faulkner's words: "Setting an example for your children takes all the fun out of middle age."

Our favorite Southern breakfast in Oxford is at Big Bad Breakfast on North Lamar. They specialize in homemade jam and make their own sausage, and their biscuits are almost as big as a baby's head. On Saturdays, there's a small farmers' market in the parking lot outside with live music, free puppies, and a whole lot of fresh vegetables and honey.

SQUARE BOOKS, JR. IN OXFORD
Square Books, Jr. in downtown Oxford is an awesome bookstore for kids and teens. Not only is it filled with great children's literature, but there's a good changing table in the restroom, and an extensive play area for toddlers with doll houses, toy car tracks, mini shopping carts, blocks, and couches for hot, tired parents to lollygag upon while their children go bonkers.
At my reading at Off-Square Books, just around the corner from Square Books, Jy., the patrons were cool about kids. My kid was sweet on the house cat, which distracted her while I read. Later, she got up on stage and had herself a good time, pretending to sing in the microphone.


Taylor is a "hamlet" south of Oxford, a twenty-minute drive down Taylor Road where lofty vegetation encroaches on either side of the road, and the houses are few and far between with their corrugated rooftops and occasional horses.

LAST NOTE on BBQ
They say the best shredded, barbecued pork is in Memphis. Upon posing the question of where to eat after we flew in to Memphis, some local ladies sucked their teeth and highly recommended Jim Neely's Interstate Barbecue. We went and were loaded up with more meat than I'd ever need to eat again, and barbeque sauce up the wazoo. The baby seemed to like it, too, spices be damned.


Posted by Unknown at 9:22 PM No comments: Links to this post 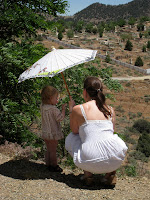 Writing about places to take a baby outside of the San Francisco Bay Area exceeds the focus of this blog, but there ya go. The place in question is Virginia City, Nevada, a location I'd not heard about, but now think is perhaps the loveliest place in the whole hot, dry state. Temporary home of Mark Twain, built on the riches of gold and silver veins discovered in the 1800s, once a boom town of thirty thousand, Virginny City isn't just a throw back to another era with its preserved buildings, but a physically stunning location in the mountains of the high desert, fragrant with sage. 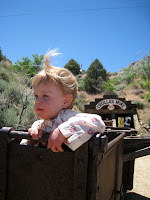 And for babies and kids? Where else can you ride a steam train and a stagecoach pulled by galloping Quarter horses, stumble down a wooden sidewalk, feed carrots to a donkey named Independence that's owned by a man named Stinky, and explore an old mine shaft? Then come evening you can eat at the inexpensive and delicious barbeque joint, or perhaps delight in the one Chinese restaurant in town, where you can sit on the back porch with its 100-mile view, eating Asian food so good it rivals San Franciscan cuisine. (Then for a dollar, go into the downstairs which has an old-time smut museum---no problem for the littlest ones; a boobie is just a boobie, after all. Speaking of museums, there are quite a few in town.) 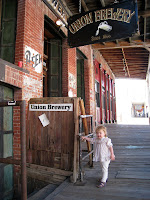 For all those parents who like to sip a beer while bouncing their baby, the townfolk don't seem to mind kids in the bars. (Fun fact: In 1966, the house band of the Red Dog Saloon was Big Brother and the Holding Company, and at that saloon, a young woman named Janis Joplin came walking in one evening...)

We stayed at the Sugarloaf Mountain Motel, originally built in the 1800s (but alas, the room we stayed in was prefab). I must say the proprietors were some of the kindest, most generous people we met; they were very baby friendly, offering fruit and swift, sweet pinches to the baby's cheeks. 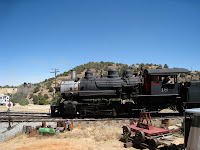 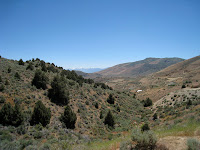 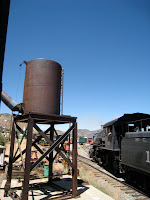 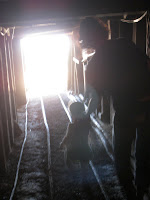 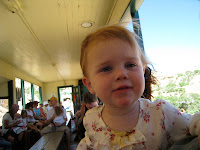 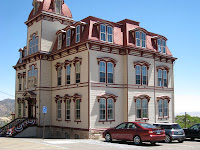 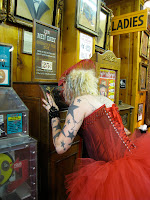 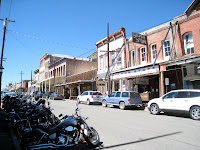 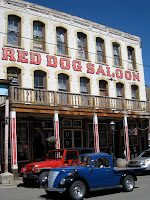 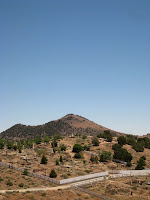 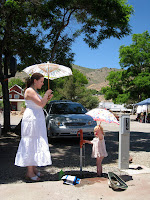 View Larger Map
Posted by Unknown at 9:25 PM No comments: Links to this post

Labels: Mackay Mansion, Nevada, Sugarloaf Mountain Motel, Virginia City
Newer Posts Older Posts Home
Subscribe to: Posts (Atom)
No city should be too large for a man to walk out of in a morning. ~Cyril Connolly