Watching this footage of old time San Francisco (circa 1960s, that is) and hearing Jack Kerouac describe being here brings up two things. First, it makes me love the place, the history and the home the city is, the views I'm familiar with, and the many streets I've never been down, but hope to hoof with my small kid in tow.

The second thing this video makes me think of is growing up in San Francisco. Lately I've been having conversations about raising a kid in this city, which I think is a pretty good idea. Of course the landscape is great. There are neighborhoods and hills, ocean and bay, and all these lovely microclimates, urban farms, and parks. Composting and recycling are expected, and jackhammers are busting up concrete in a greening frenzy. The city looks lovely, in part 'cause it's spring and the golden poppies are stunners. Still it's hard for me--a country-loving city gal--to weigh a rural landscape against San Francisco's concrete and cars. But the best thing about raising a kid here isn't because of the landscape.

It's because of the people! It's a real candy box of humans. For a kid there's the chance to grow up to be who one wants to be, really truly there's an encouragement to fly your freak flag. Man, it's refreshing!

I just came back from international travels via Texas, land of Bush and God, which reminded me of the best part of San Francisco, the people.

I like thinking of some of the local kids I grew up with in the Eighties who still are here, or just over the bay or down the peninsula. They're a big reason to stay--not just them as individuals, but each of them as a possibility for my own kid to become, or to look at and say, "Yeah!"


Sheryl was my friend from elementary school. She learned Native American dancing, which meant everything to her being Native American, and it made her blossom.

Terri is raising a real San Franciscan boy, spirited but sweet, like the boys I remember back when the Giants and the Niners were always winning.

Nikki, a hunky transvestite from Puerto Rico who liked to preface sentences with "Girl!" went to my high school. He loved being in San Francisco because he would've been killed back in Puerto Rico, he told me.

Curly-haired Casey (who was my secret crush in middle school) now grows native plants and tends several farms in San Francisco; he can tell you about lupines on Bayview Hill and which butterfly prefers them.

Aaron and Colin, the Dungeons and Dragons-loving twins from high school, have ridden their bicycles thousands of miles away from here, but still they keep coming back to this city. 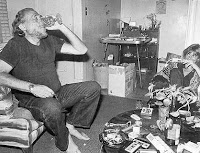 Suzie's singing jazz and dipping brushes in oil paints, meeting up with Thea who's been rambling around the country in a flatbed truck and living in Mexico, only to finally find her way home.
Posted by Unknown at 3:58 PM No comments:

Labels: Jack Kerouac, October in the Railroad Earth, San Francisco
Newer Posts Older Posts Home
Subscribe to: Posts (Atom)
No city should be too large for a man to walk out of in a morning. ~Cyril Connolly