Local legend has it the Devil was sick of the pious townsfolk with all their quaint little churches in southeast England. He had the brilliant idea to dig a great ditch to the English Channel, hoping he'd open the floodgates to drown all those irritating churchgoers.   He set to work digging his ditch, calculating that he should dig until dawn.

It happened that a little old lady with nothing better to do than stay up late and peek out her window, spied the Devil and his massive shovel, and figured he was up to no good. She lit a candle and stuck it on her windowsill. The light of the candle woke her rooster, who promptly puffed out his chest and cock-a-doodle-dooed, thinking it was morning. Wiping the sweat from his red brow, the Devil figured it was morning and tromped on home to get some shut-eye.
Suffice to say, the Devil didn't go back to his digging, and the valley was never flooded. 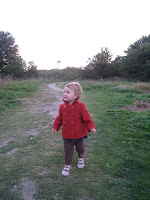 We actually didn't walk very far, but I have read that the trail is about five miles and circular. It is up and down steep valley sides, so not stroller-friendly.
There's a pub at the parking lot where you can find hearty English food, a stiff drink, and toilets. Keep an eye out for bunnies--they are everywhere. And if you don't want to drive there, you can take an open-top bus from the centre of Brighton in the summer.

View Larger Map
Posted by Unknown at 12:32 PM No comments: Links to this post

While I was bathing in a geothermal pool with my British girl friend, Laura, soaking our barking dogs after a rambling day, much like the Romans did here a thousand years ago, my husband and our daughter hiked to a hilltop to get a view of Bath, England. From the city center, Sham Castle is about three miles roundtrip, and up such a steep hill that my husband ditched the stroller in some bushes two-thirds of the way in. 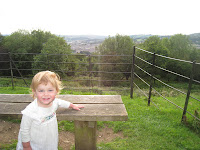 Their destination was Sham Castle on Bathwick Hill. While my view for the next hour and a half was of other tourists' heads bobbing over a steamy pool,  my husband and daughter breathed fresh air, looking over the ancient city of Bath, nestled in the green hills of southwestern England, and played around the false front of a castle. 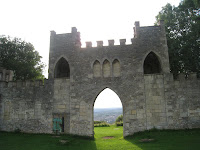 Crossing the Pulteney Bridge from central Bath, father and daughter set out. They passed Laura Circle, rounded the Holburne Museum of Art, meandered through the Sydney Gardens, across the railroad trestle and over the Kennet and Avon canal, ever climbing upwards, towards the Bath Golf Club located next to Sham Castle.

Eventually they walked up a road bordered on one side by National Trust pastureland dotted with cattle and historic homes on the other. After a long shady grade, they made a left turn up the one lane Bath Golf Club road.  Upon seeing the grand entry gate to the golf club, they made a right up the hill along a forested single track path for around a 100 yards before coming to a mowed clearing. 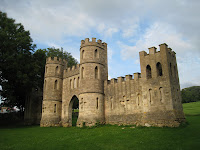 Rising from the lawn was the picture perfect castle facade. In 1762,  Ralph Allen commissioned Sham Castle to be built so that he could have a better view out of his windows. It was a monument to fantasy and whimsy, maybe only fifty feet wide. From the backside it looked like there was a door to get up into the tower (so it wasn't a completely superficial facade) but the door was padlocked. So father and daughter played on hide-and-seek on the grass, until they began their walk downhill to meet me in the city center.

Labels: Bath, Bathwick Hill, England, hiking with children, Sham Castle
Newer Posts Older Posts Home
Subscribe to: Posts (Atom)
No city should be too large for a man to walk out of in a morning. ~Cyril Connolly