I would love to publish other people's writing on Hill Babies! The only guideline is that the article be about hiking with children in the Bay Area.  If you're interested, please contact me.  And if you know a writerly hiking type of parent or caregiver, please tell them about Hill Babies.

jericahahn@hotmail.com
Posted by Unknown at 11:17 AM No comments: Links to this post 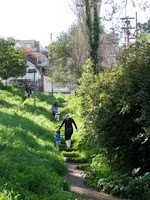 I grew up on Potrero Hill, so I’m somewhat partial to this sunny, banana-belt of a neighborhood on the eastern edge of the San Francisco Peninsula. There are two playgrounds on Arkansas Street, and the walk between them takes you from the flatlands to the top of the hill, and back again.
THE HIKE & PLAYGROUNDS
The first playground, a big one with all sorts of cool equipment, is on Arkansas and 17th Streets, adjoining a green baseball field. You’ll be just down the road from the Anchor Steam Brewery, which you might locate just on its earthy aroma of hops and malt (and has free tastings and tours of the plant, even their distillery—but call first because there aren’t any drop-in tours). 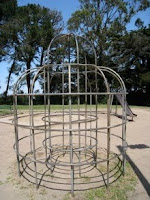 The second playground is at the Potrero Hill Recreation Center, on Arkansas and 23rd/22nd Streets. It’s more my childhood stomping grounds, near the top of the hill, just a couple of blocks from where I grew up. The bare-bones, old school play structures are behind the indoor basketball court (which is a very cool old wooden structure; if neighborhood kids are shooting hoops, you can see the old gallery of team photos from the 1970s and 80s). There’s also a baseball field, a hillside of eucalyptus and wild plants adjoining some housing projects, built in the 40s for Navy workers, so I’ve heard, and a lovely community garden in the northern border, near Connecticut and 22nd Streets. 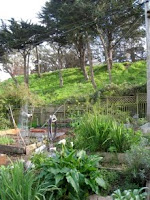 The hike (maybe a mile) between the two Arkansas Street playgrounds is uphill, but a great walk.
I recommend starting on Arkansas and 17th, where it’s flat, and then hiking up to the Pot Hill Rec Center on Arkansas and 22nd/23rd.  Walking uphill in San Francisco is truly gratifying when you reach the peak of a hill, hang out for a while, have a picnic, marvel at the view. Then go downhill, going past the community garden, maybe stopping at a café or a grocery store or the library along the way back down to the flatlands.
THE BABY FRIENDLY BITS 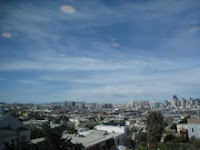 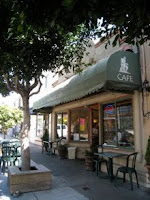 There are public restrooms, water, and a fantastic wall of windows in the children’s section of the Potrero Hill Library, which is at the halfway point of the walk. Go east on 20th Street a block or two. Also on 20th Street is the Thinkers Café, several grocery stores (one being Good Life Grocery, where I worked when I was 15 and 16), and a pricey but good sandwich shop.
The playgrounds have rustic bathrooms and drinking water too.
RELATED HIKES and DEVIATIONS 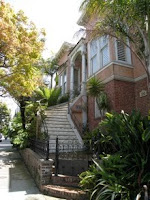 The 22nd Street Staircase—For a longer walk, do up the long staircase basically going west from the community garden, up what would be 22nd Street, all the way to the blue water tower on Wisconsin. There’s a cool old firehouse up here and great views of San Francisco. 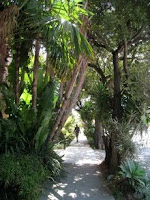 The Pink Palace—One of my favorite mystery houses is a salmon-colored, turn-of-the-century mansion, on Wisconsin and 20th Street. The sidewalk is overtaken by its tropical garden.
MAP AND DIRECTIONS

View Larger Map
Posted by Unknown at 11:12 AM No comments: Links to this post

Labels: Arkansas Street, Potrero Hill, San Francisco playground, San Francisco stairways
Newer Posts Older Posts Home
Subscribe to: Posts (Atom)
No city should be too large for a man to walk out of in a morning. ~Cyril Connolly