Being very pregnant yet needing a walk that wasn't too strenuous, I thought of Pescadero. I wanted a place that was flat, full of wildlife, and close to water. The other weekend my husband, daughter, and I explored Pescadero Marsh Natural Preserve, hiking trails we had never been on, but were so impressed by, we planned to return again soon.

To get here, we drove approximately forty miles south of San Francisco on Highway 1. When we crossed the bridge over Pescadero Creek, we took an immediate right into the first parking lot for the beach. There's a rudimentary bathroom there, and a heartening sign about bi-monthly marshland walks--we were in the right place.

Our destination was the Sequoia Audubon Trail along the southern edge of North Marsh, one of several trails in the 600 acres of protected marshland. We had read that there was always wildlife present (230 bird species annually), and plenty of flora (200 species), including some wild and weirdly shaped eucalyptus trees that had been gnarled by old floods. Most essential for my physical state, the roundtrip mileage was about two miles.

We went by foot north across the bridge on the pedestrian walkway, then under the bridge.

The beach was so compelling that we could've spent a day just hanging out here. The sand was soft, and the confluence of Pescadero Creek and the Pacific Ocean seemed like a magical site for wildlife. The beach itself was full of twisted driftwood and human-made sculptures that were like windbreaks, and very few people. Sand pipers scampered along the shoreline in swift-moving flocks, and gulls sailed overhead. An informational kiosk, burnt yellow by the sun, informed us that rainbow trout, also known as steelhead when they reach the sea, spawned here. 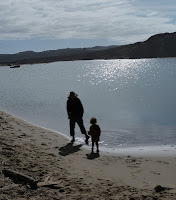 We walked under the bridge, traveling along the creek's smooth, sandy shoreline for about a hundred feet. The sand was so soft, and the water so still, it was tempting to stay here all day too. But we saw a trailhead to our left with a small sign reading SEQUOIA AUDUBON TRAIL, and went down it.


The trail was sandy, soft on bare feet. On either side grew a kind of coyote brush I hadn't seen before, very low lying, close to the ground. I recognized lots of coastal buckwheat, and wondered what butterflies might be here come springtime.

One of the interesting aspects to this trail was the number of informational signs regarding flora and fauna. With the help of the ones we passed along our route, we could find live examples of salt grass, California bulrush, and common pickleweed. Among the plants I'd like to touch were stinging nettles and poison oak, two to be avoided. (Suffice to say regarding the "untouchables," we did not get any stings or rashes after this trip, and we do like to press along the edges of the trails.)

Other plants we saw included healthy bushes of lupine, still to bloom later in the season, feathery-leafed yarrow, and invasive (but pretty when flowering) ice plants.

Eventually the trail was hard packed earth, though because of the amount of sandy stretches, I would highly discourage anyone to attempt this with a stroller.

We rested on a weathered bridge leading to the North Marsh Trail, and ate oranges in the sunshine. Our daughter pretended she was a goat from the Billy Goats Gruff fairy tale.

We continued on, and some docents we met suggested we eat our lunch at Turtle Pond, half a mile up on the right hand side before a bunch of dusky-footed woodrat nests.

Across the marsh we saw dozens of birds, including a snag of a tree that had become a rookery for great egrets, snowy egrets, and great blue herons. How lovely to see these birds flying, graceful, with long necks and wings.

We passed an incredibly twisted eucalyptus tree along the trail that had been shaped by floods. The thick branches hung low to the ground, and were like magnets for our small child. Shadows and light filtered over branches and leaves, and we could've easily spent the rest of the day here, hugging the tree.

Only a mile or so along Sequoia Audobon was a short and somewhat overgrown path veering to the right, and we took it, hoping it would lead us to Turtle Pond as the docents instructed. Water glimmered through the trees.

Sure enough, there were two benches here, as told, and a downed tree hanging over the water. Though we didn't see any red-legged frogs or Western pond turtles, both natives to the area, we had a tranquil picnic beside the water. We wished we had a little rowboat to cruise and down the creek from this point.

We did walk further on the Sequoia Audubon--we'd been told there was a lookout and loop at the top of a low hill just up the way. But the day was cold, though sunny, and after we passed by a half dozen dusky woodrat nests, and under willow trees loaded with buds that were not yet in bloom, shivering in the shade, we turned around. We had had a great walk and picnic, and would return again another day.

Back at our car, we decided to drive into the tiny town of Pescadero to visit Duarte's Tavern, a restaurant that had been around since the late 1800s. We ordered our favorite: artichoke soup for starters, whatever entree looked good for the day, and fresh pie. (We usually get ollalieberry, a local speciality, but today I was craving pear pie.) And we're we lucky--Ronnie Duarte, the proprietor and an old-timer with a good sense of humor, came over to chat with us and tell us about how to grow ollalieberries.

View Larger Map
Posted by Unknown at 1:20 PM No comments: Links to this post

Labels: hiking with children, marshland, Pescadero Beach, Pescadero Marsh, Sequoia Audubon Trail
Newer Posts Older Posts Home
Subscribe to: Posts (Atom)
No city should be too large for a man to walk out of in a morning. ~Cyril Connolly