As one who prefers trails of dirt to those of concrete, and outdoor wonderlands made of trees and caves and creeks, I was a snob about visiting the Children's Fairyland in Oakland.

Then I visited and now I repent my snobby ways.

THE WORTH OF A VISIT
Children's Fairyland is the best man-made children's park I've ever been to, seriously, and blows doors on any modern playground or amusement park. I also happen to be a lover of myths, legends, and fairy tales, so this was a treat for me too.

I was afraid the setting would be hot, literally baking like most playgrounds constructed of artificial things in the middle of a city, but most of the play structures were under enormous oak trees, redwoods, and along a meadow. Flowers bloomed everywhere, and the place felt cool and refreshing.

I came for a play, but fell in love with the place. With forty different fairy tale and nursery rhyme settings, how could I see all of them? Then there were puppet shows, a hill to slide down, farm animals (I only saw the two donkeys), rides, a day camp, overnight possibilities, and more.

REAL-LIFE CHARACTERS
We met some interesting characters there, and not just from fairy tales. There was a couple of my parents' generation: a visiting wizard named Oberon and his fairy-wife, Morning Glory, both sweet as can be, carrying a gentle opossum named Blossom in a knitted bag. (As an aside, they run a wizardry school, GreySchool.com, worth looking into if you like magic)

HISTORY
I love history and old places, and Fairyland opened in 1950, when my mother was a little girl and long before Disneyland existed (there is a rumor, or truth, that Walt Disney was inspired when he visited this park).

As I wandered around, following my daughter as she went from carousel to toadstool to crooked house to rabbit hole to the belly of the whale to pirate ship, I thought about the generations of children who have explored this place. There's a cool retro style to the place, a real Fifties vibe.
HIKE AROUND LAKE MERRITT

Fairyland is right against Lake Merritt, a tidal lagoon that continues to draw enormous flocks of birds and resident Canadian geese. The walking path around the lake is a little over three miles, and there are boats one can rent, plenty of food places, and easy public transportation, like BART, nearby.

One drawback to Fairyland is the price, $8 per person (everyone 1 and older), but that's not so bad considering entrance includes unlimited rides (carousel, train, Ferris wheel), and the place is a nonprofit organization where you can volunteer in lieu of payment. Membership only allows those people named on the card to enter (meaning no loans to friends or babysitters). Free passes can be obtained, according to Fairyland's website, but I don't know how easy they are to get. 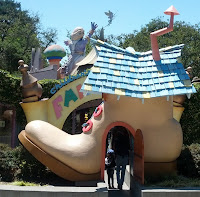 The next time I come, I am going to pack a picnic (there's food to buy and an espresso bar, FYI), and maybe bring a book or two of children's fairy tales, plus a Mother Goose nursery rhyme book. Maybe a big ol' floppy hat too, since it's always so much sunnier in Oakland than SF. 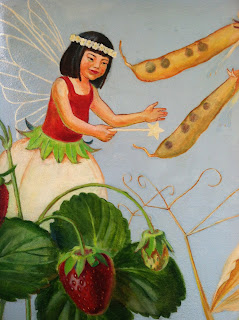 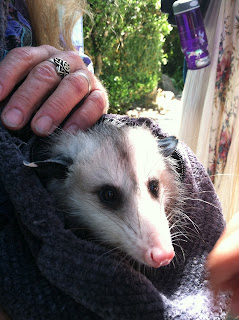 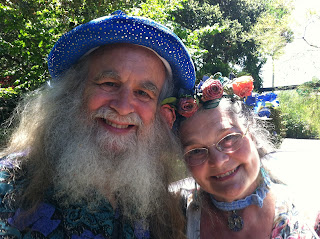 THE SITE OF THE BATTLE OF HASTINGS IN 1066 AD

On a lovely summer day in southern England, a group of adult friends and three kids  (ages 2, 6, and 9) decided to explore a new place for all of us: Battle, just outside of Hastings in East Sussex, England. Not only was it a majorly important site in British history (in 1066 AD, William the Conqueror and the Normans battled King Harold and the English here), but there were trails, a ruined abbey, an interactive museum, and a meadow where the pivotal battle occurred. The site of the Battle is a rough field, shrouded by undergrowth and trees--rendering reenactment perhaps impossible. :-) There is a very good visitor centre with some artifacts, audio and a short film about the battle that help to bring the site to life. On the ride home, we agreed how  everyone in our group loved the place.

The six-year-old loved the interaction---the audio guide, the way he could pick up the Norman shields in the museum, the grass hopper he caught in the field, and that there was nothing restrictive about the place. Everything encouraged him to use his imagination, especially when he ran amok, exploring the ruins of the old abbey (that William the Conqueror built after his success).

The nine-year-old loved the independence---that she could go on her own down the trails and in the abbey, listen to the audio guide instead of hearing adults yammer at her, and the chance to order a piece of cake and a cup of tea at the cafe. She also appreciated the short movie in the museum. 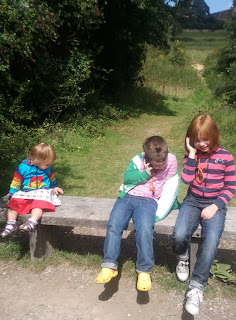 The two-year-old loved the sensory experience---handfuls of fresh blackberries that she picked along the trail, running through the meadow which was the battlefield, and chasing the other children in the old abbey.

HISTORY
Battle marks the site of the last successful military invasion of Britain. The Normans were originally Vikings who settled in northwest France in the 900s eventually creating a powerful state - Normandy. In 1066 William, who had a claim on the English throne, defeated King Harold at the Battle of Hastings and was crowned King on Christmas Day. A new alien aristocracy was imposed on the English population. The Normans dispossessed many Anglo-Saxon landowners, pressed the peasantry into service on their feudal territories and treated their subjects with contempt but they also taught better farming practices, developed the economy and built fine stone cathedrals and churches.

The abbey was founded by William the Conqueror in thanks for his victory and in penance for the bloodshed. The altar of the abbey is said to be located on the spot where Harold died. The abbey was prosperous and during the Dissolution of the Monasteries in Tudor times it was given to Henry VIII's Master of Horse who demolished the church, cloister and chapter house and converted the rest into a country house. The west wing is today a private school, while the fragments of the old abbey are very atmospheric and good to explore. 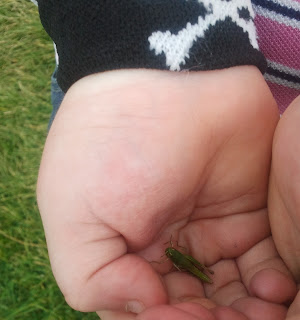 Posted by Unknown at 2:43 PM No comments:

Labels: 1066, Battle Abbey, Hastings, William the Conqueror
Newer Posts Older Posts Home
Subscribe to: Posts (Atom)
No city should be too large for a man to walk out of in a morning. ~Cyril Connolly