(
Join my husband and I, and friends John and Rebecca, and all of our little kids for a group hike at Redwood Regional Park in the Oakland hills.

We will walk on a stroller-friendly trail, a mile in and a mile out, along Redwood Creek where towering redwoods, fragrant bay laurels, and beautiful madrones grow.

THE TRAIL
We start at Canyon Meadow, close to the park office, fire station, and a historical fishway interpretive site, a historical landmark. You'll find Canyon Meadow just through Redwood Gate, off of Redwood Road.

We will walk the Stream Trail where the air is clean and moist. Stream Trail is only 0.9 miles long, and its asphalt surface easily accommodates strollers. We'll visit a meadow with a play structure (bars and slides) for the kids to explore. If we're lucky we might see deer, or a rabbit, or hear a Great Horned Owl.

Note that there is a $5 parking fee, and if you bring your very friendly dog, that'll be another $2.

Redwood Regional Park
There are 1,800 acres in this important watershed park, and it's just a short distance from the bustle of Oakland. Back in the mid-1800s, loggers cut down the biggest redwoods to supply the demand for building materials, for homes and ships, during Gold Rush times. Though the redwoods you'll see on our hike are second and third generation, they are nothing to sniff about, reaching over a hundred feet tall.

Hill Babies--What's this hike about?
No hidden agendas, just some old-fashioned fun. Though we go at a four-year-old's pace, big kids are encouraged to come and go as fast as they like. Sometimes it's all about just getting out of the house and meeting up with some people who want to be outside with kids, and in Mother Nature's playground.

Directions Going eastbound on I-580 in Oakland, take the 35th Avenue Exit. Turn left, going east on 35th Avenue, which becomes Redwood Road. Go about four and a half miles, crossing Skyline Boulevard, and look for park entrance signs. The main entrance, Redwood Gate, is on Redwood Road, about two miles east of Skyline Boulevard.


Rancho Corral de Tierra is less than half an hour south of San Francisco by car, situated close to the Pacific Ocean, off of Highway 1, and straddles the mountains behind the communities of Montara, Moss Beach, and El Granada. There's 4,000 acres here, criss-crossed by creeks flowing through the chaparral and coastal scrub habitats. In certain spots the view of the western horizon is so expansive, one can see the curve of the earth along the blue Pacific Ocean. 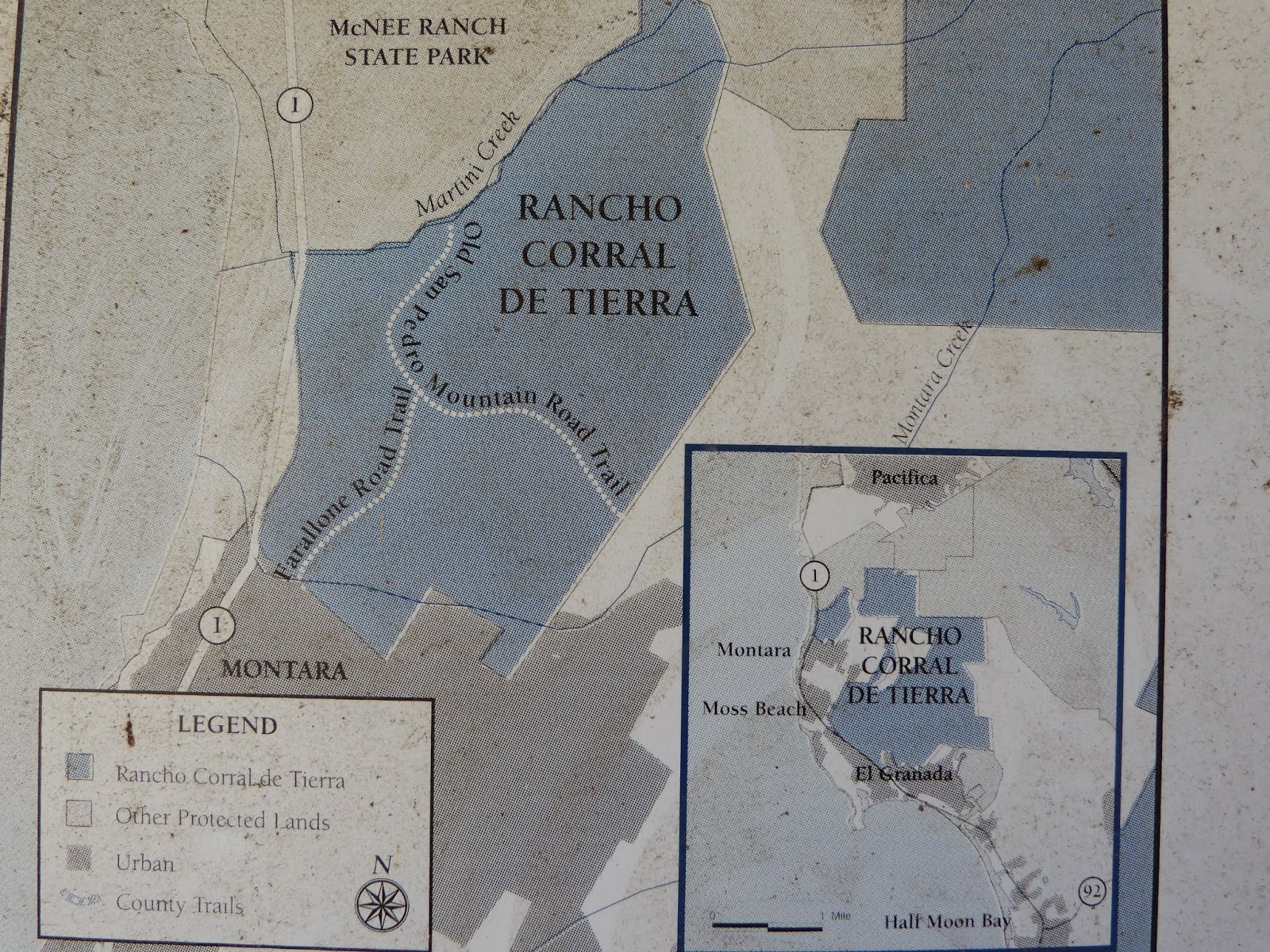 I came here for my first time in January of 2014, brought by a friend and former co-worker, Mike Cadigan.We worked as special education teachers and led the school's hiking club, and recently re-connected at the Hill Babies group hike in December of 2013 on Bayview Hill in San Francisco. Mike has always been the one to ask about hikes on the peninsula. He still leads hikes with ICO, and I think the Sierra Club too. So when we asked if I'd been to Rancho Corral de Tierra, and learned that I hadn't, he suggested a Hill Babies hike here. Though he doesn't have little kids, he brought his seventeen year old pooch, replete with a doggie stroller. 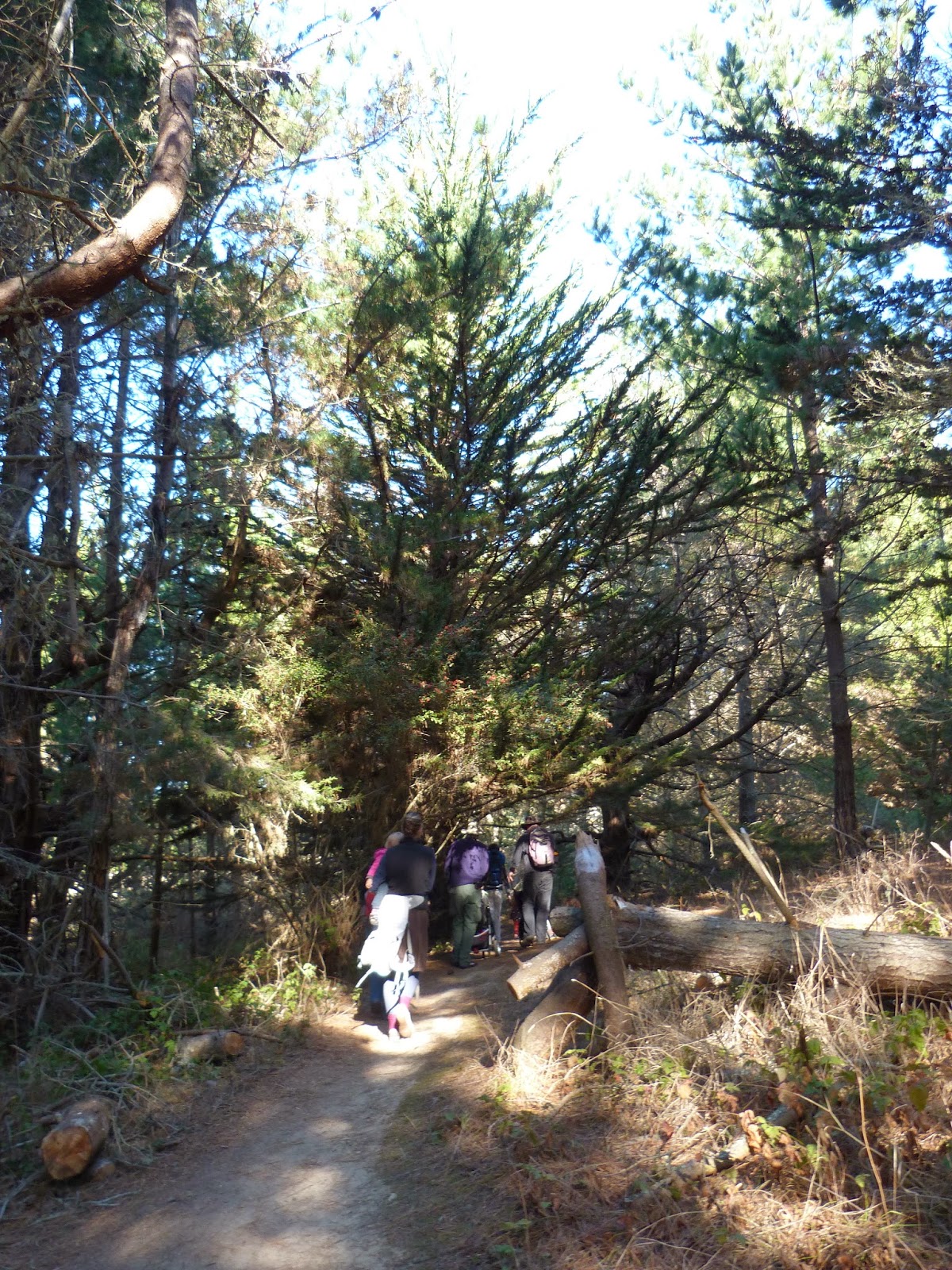 The hike began in the parking lot of Farallone View Elementary School in Montara. Though it was the weekend, the school's playground was open to use, and local kids and parents were having fun. We walked to the end of Le Conte Avenue, passing alpacas standing in a field to our right, and the kids grabbed brooms of pampas grass and shook them high (yes, pampas grass is a terrible, invasive species, and I know better than to let kids strew the seeds everywhere, but they're kids and it's fun).

There were two trails at the end of Le Conte Avenue, and we took the one branching to the right.


We headed northeast on a trail through the dense foliage, ending at intersection of Tamarind and Edison Streets. The trail continued where Tamarind Street ended, over a footbridge and into the woods.

The bulk of our hike was on an old road turned into a trail, still called Pedro Mountain Road. According to this article on Wikipedia, Pedro Mountain Road was first mentioned in 1769 when it was described as "a very bad road"---those these days it's just perfect for strollers and anyone wanting to walk with a little elbow room around fellow hikers.

We followed Pedro Mountain Road down, down, down, traversing chaparral and coastal scrub habitats. The sun shone brightly. We were far from the forest now. We walked over a mile it seemed, gradually downhill. In the back of my mind I was thinking, "Oh boy, this is gonna be a long uphill trek at the end of the day," but I was curious to see where the road would lead, and what the day would be like. Kids ran around, playing and laughing, and babies giggled.


We reached a horse farm that delighted the kids who could watch the geldings and mares stand in the sunshine and swish their tails. I was impressed that the kids didn't mind at all the stench of horse crap as a group of them, my eldest daughter included, stood on the edge of a very large manure bin and admired the horses.

We followed Pedro Mountain Road over a bridge that we called the Troll Bridge, a good twenty feet over a deep ditch. I believe, though I'm unsure, that this is where Martini Creek must flow during wetter winters than this one. Though there weren't any sounds of running water, the slope to the creek bed was lush and thick with plant life. Overhead the eucalyptus rustled in the breeze.

Across the Troll Bridge, the trail forked at North Peak Access Road. We went left, and a dozen yards up, connected to the right back onto Pedro Mountain Road. I could see a port-o-pottie in the distance, so conveniently placed.

At this point, over an hour into the walk, still under the hot sun, the kids were dropping like flies. I mean it. For them, this had become the Bantu Death March. Down dropped a family, right into the road. "The kids... Hungry... Tired," they said as they unwrapped sandwiches and popped container lids. Overhead a hawk circled.

"Mike," I said, nudging my old co-worker who was pushing along his happy-go-lucky dog. "Maybe we should stop now for lunch?"

"Just beyond that port-o-pottie is an amazing place," he said, pointing at the road curving out of sight beyond the chaparral. "It's just a quarter mile up. You can make it."

And I did, and so did several other families. Once we rounded the bend in the road you could see a grassy field and picnic tables, a few Monterey cypress scenically poised, and beyond, the big oceanic blue contending with the paler wash of late afternoon light in a blue California winter sky. It was lovely.

We ate, and then we played. We brought along a parachute for the kids to dance and jump underneath, brining back memories of doing the same in my childhood.

We retraced our route, this time going uphill on Pedro Mountain Road, though the walk seemed shorter. At some particularly whiny point, the tiniest babies were taken out of their strollers and carried on their parents' backs, while the three and four year old set piled into the strollers for a first class ride back up Pedro Mountain Road. Little prince and princesses!

Back at Farallone View Elementary School, the kids wanted to play at the playground, and we adults were happy to oblige. We left a few hairs before sunset. The kids were finally pooped, while us adults actually felt like we got quite a hike. I'd like to return here again, and explore Pedro Mountain Road more, going uphill, as far as it can go, though I might have to hire a babysitter for the kids. 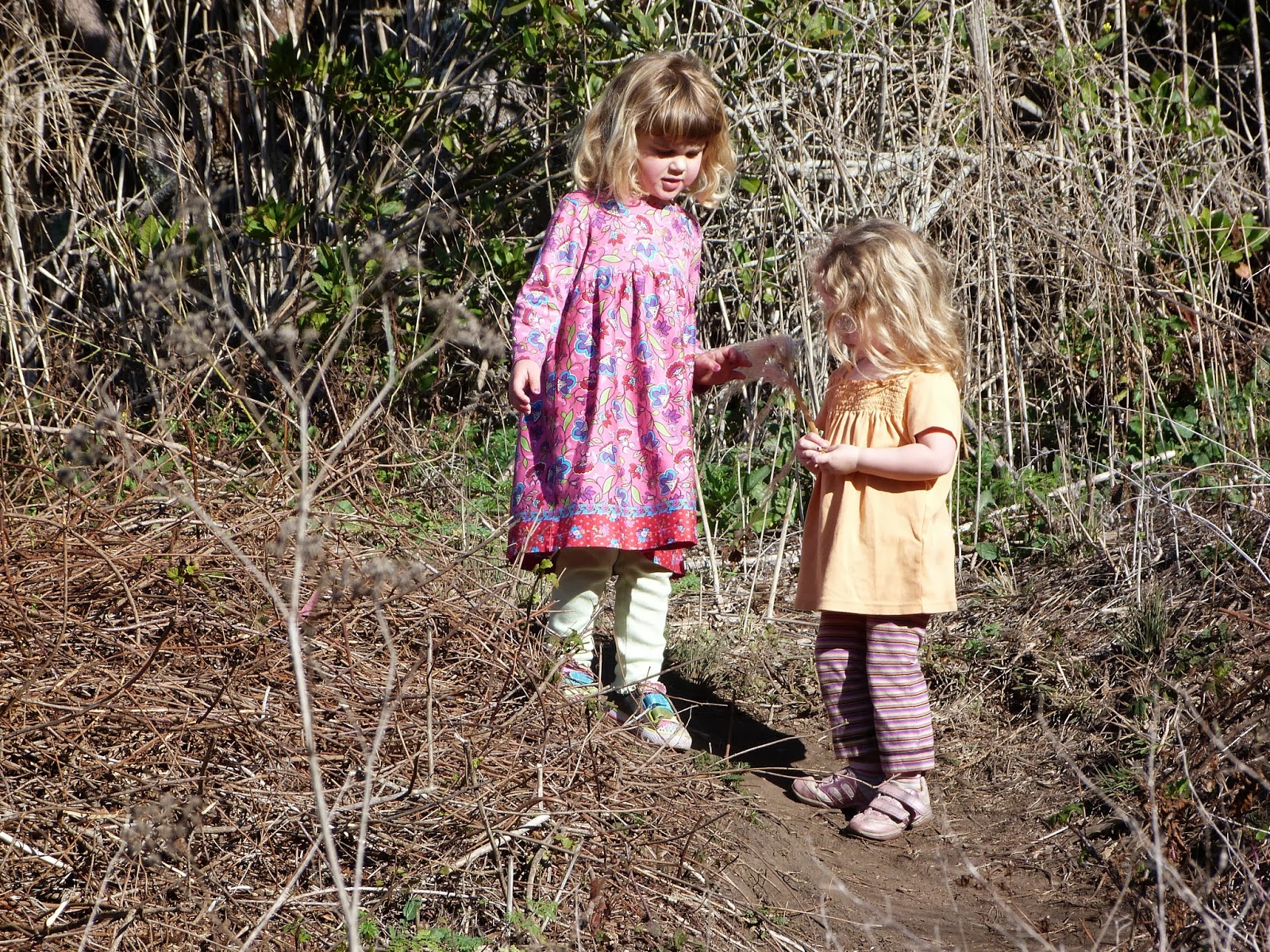 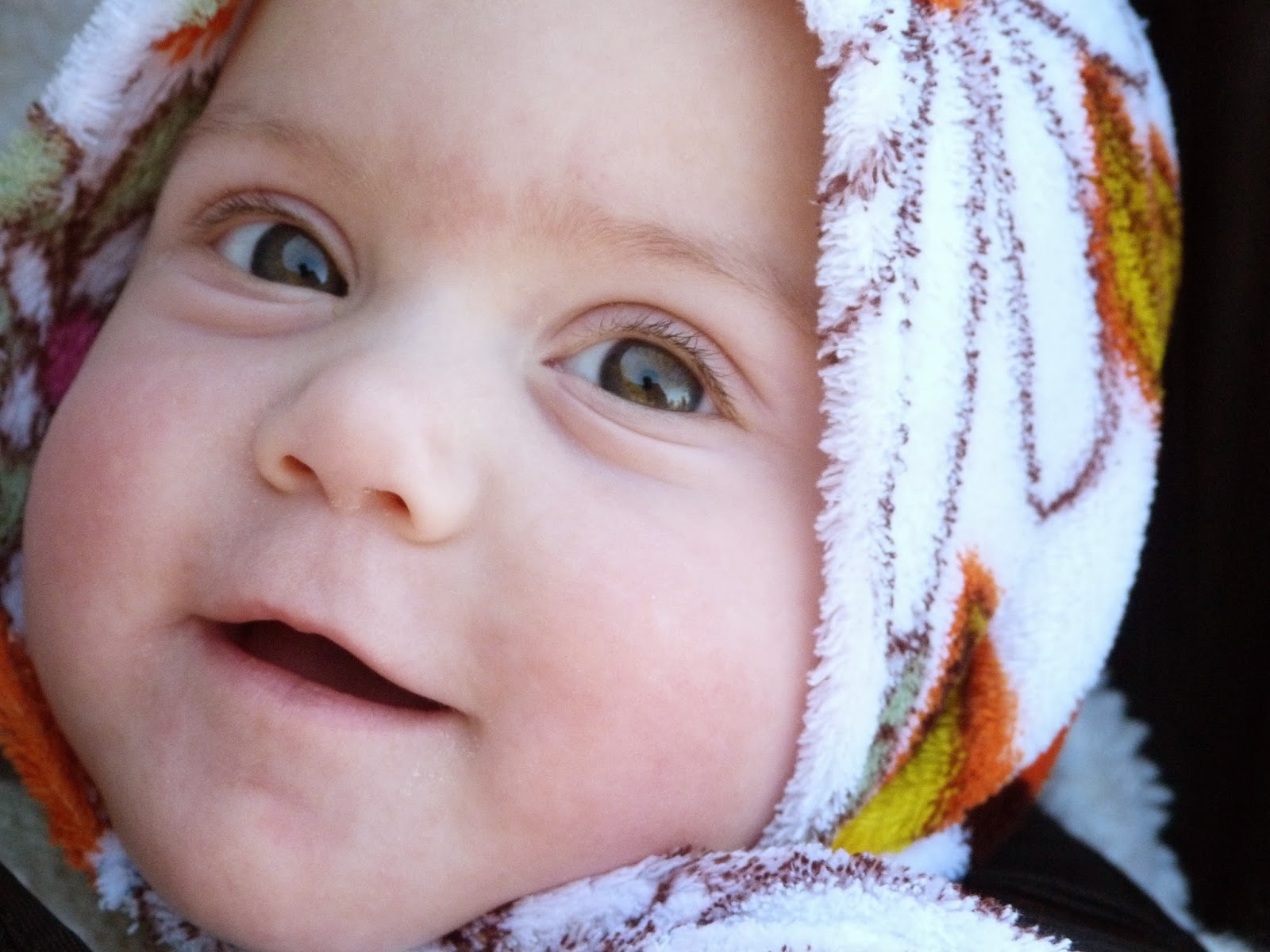 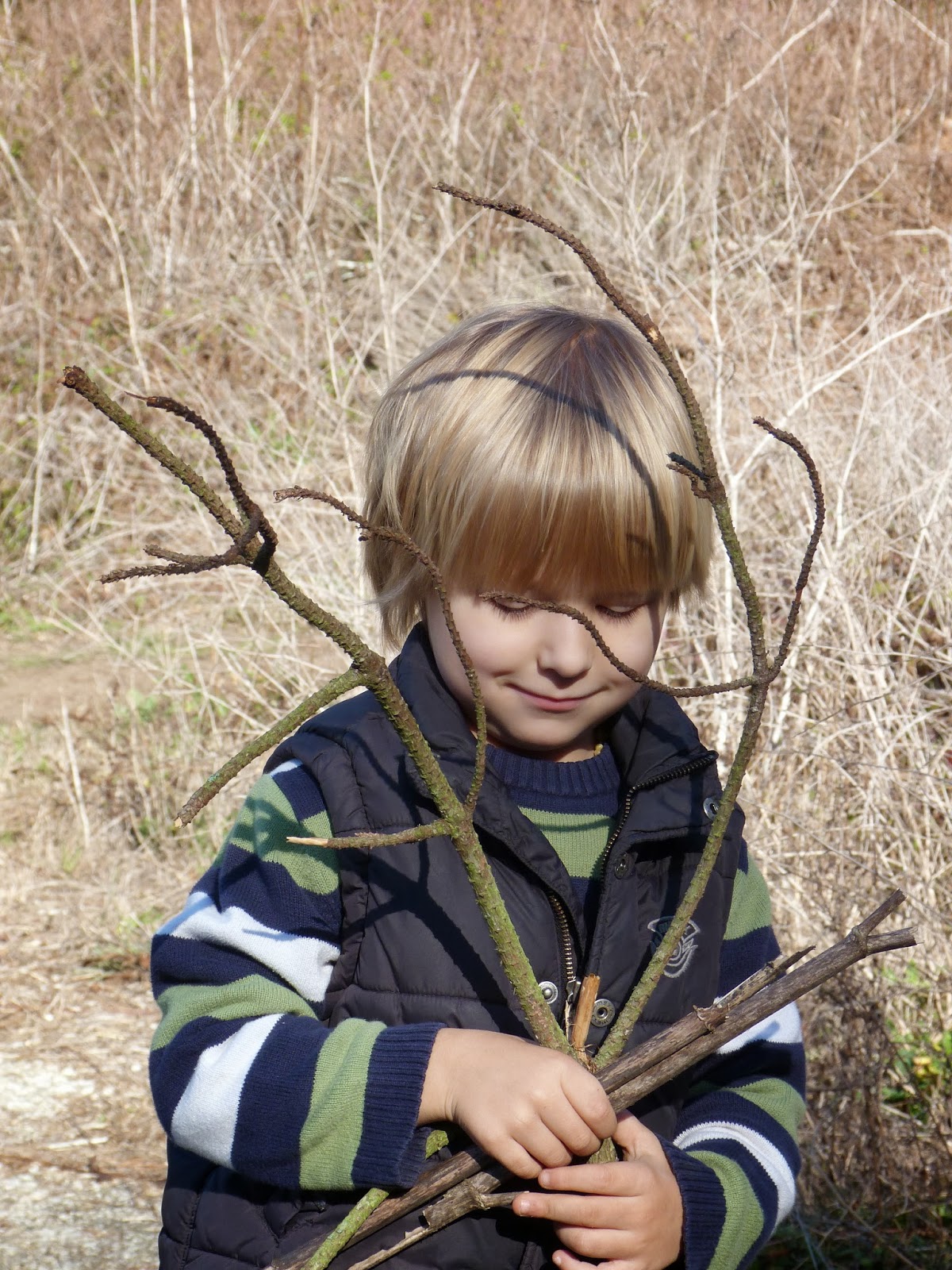 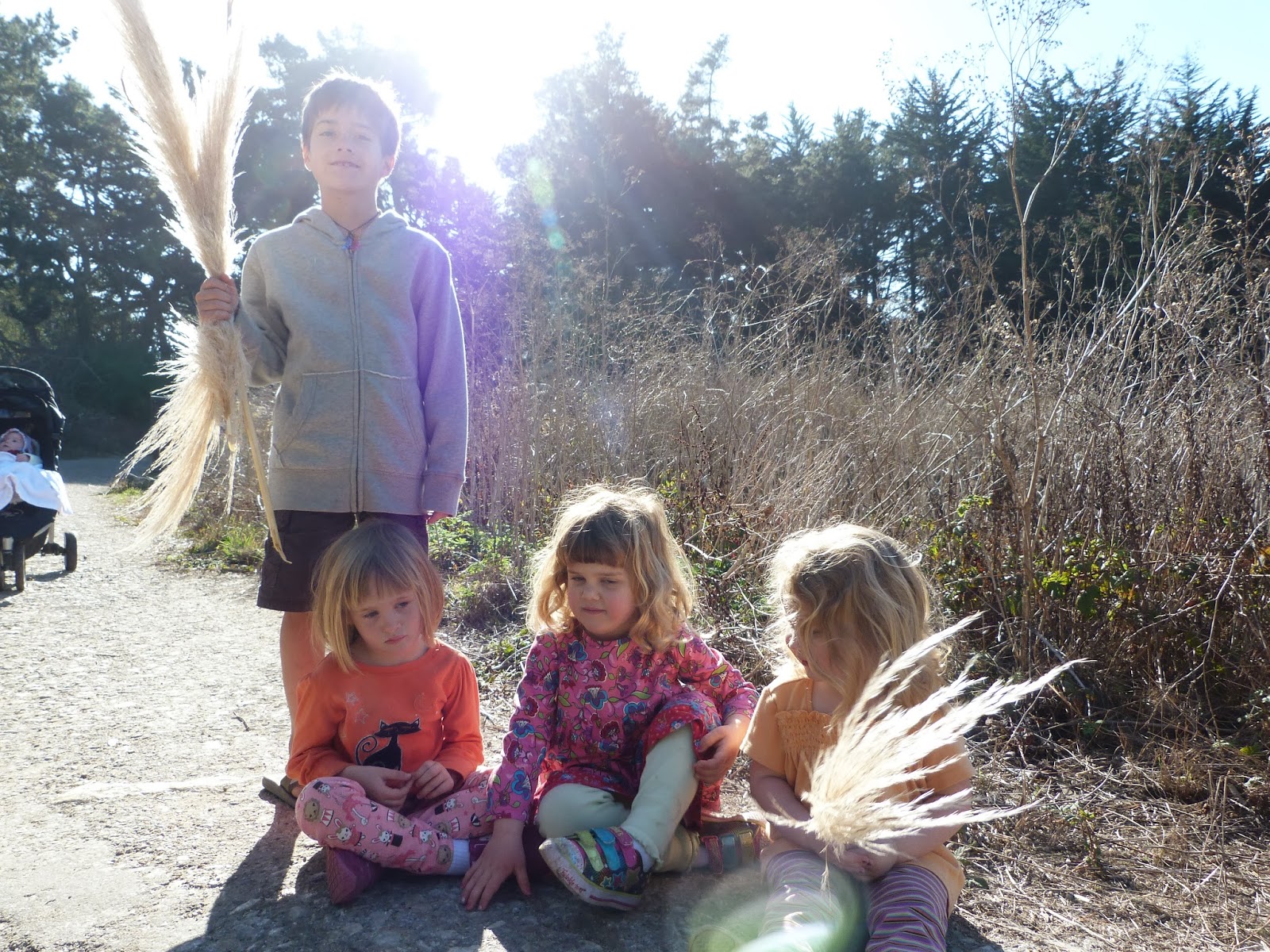 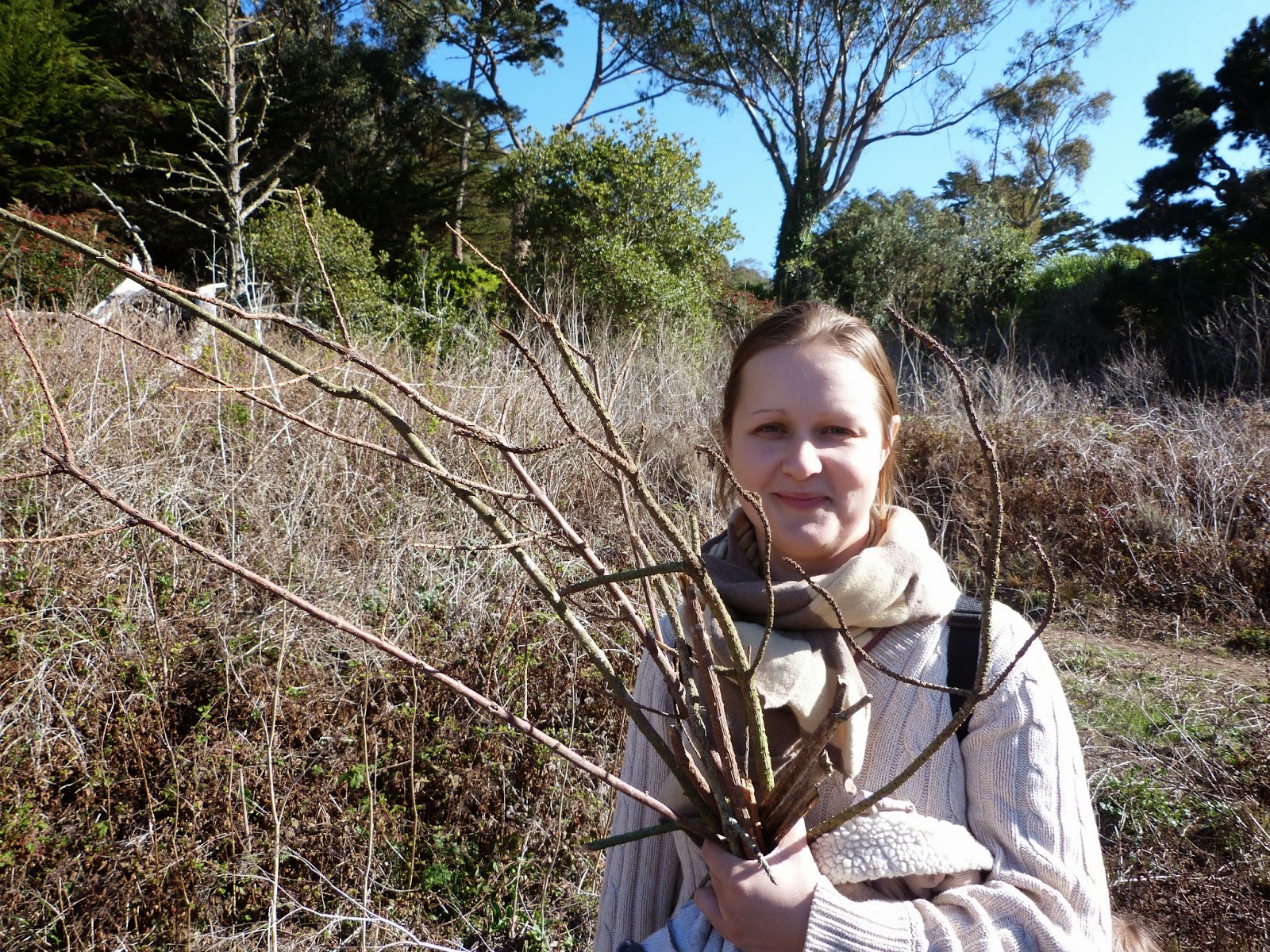 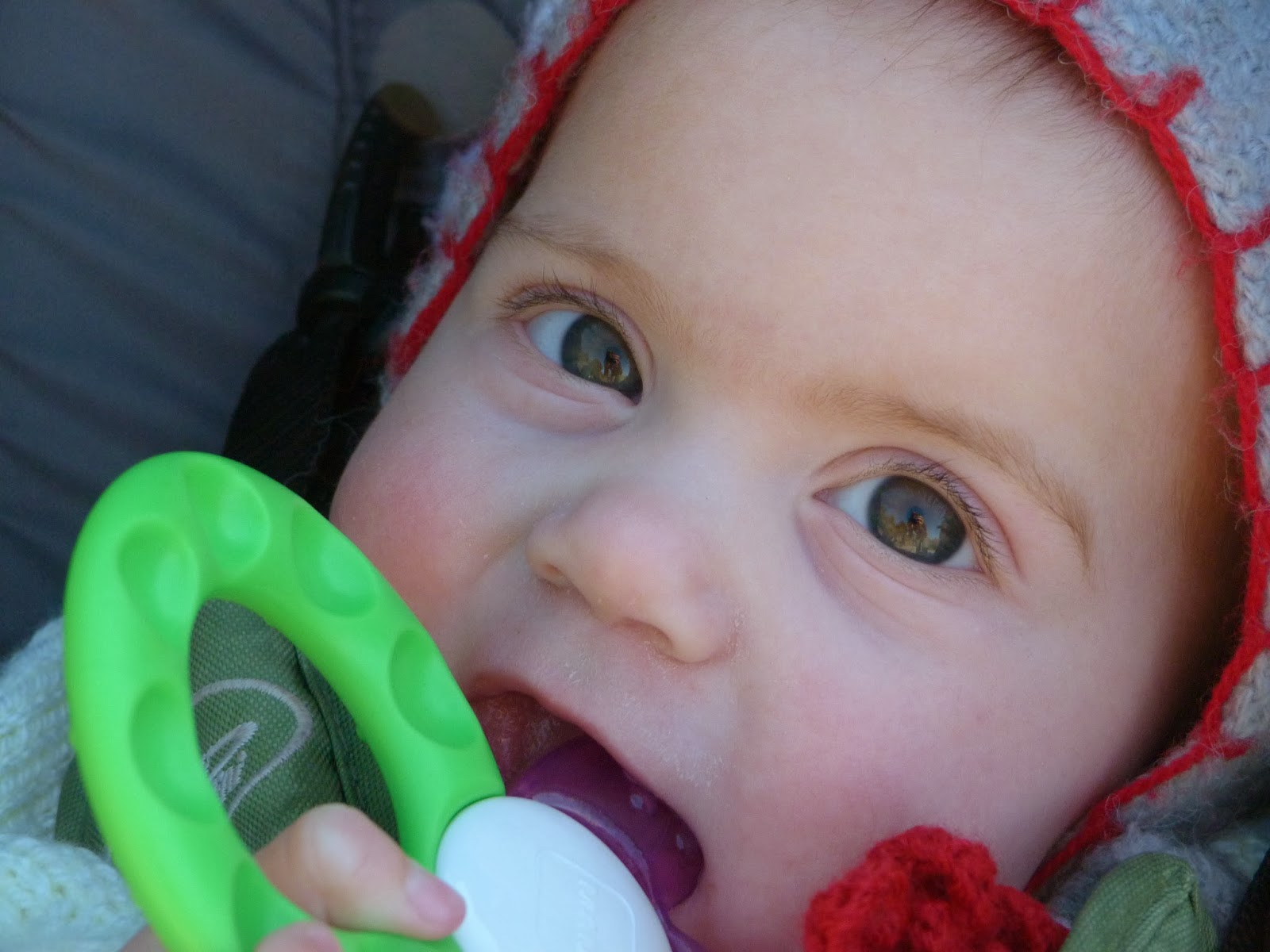 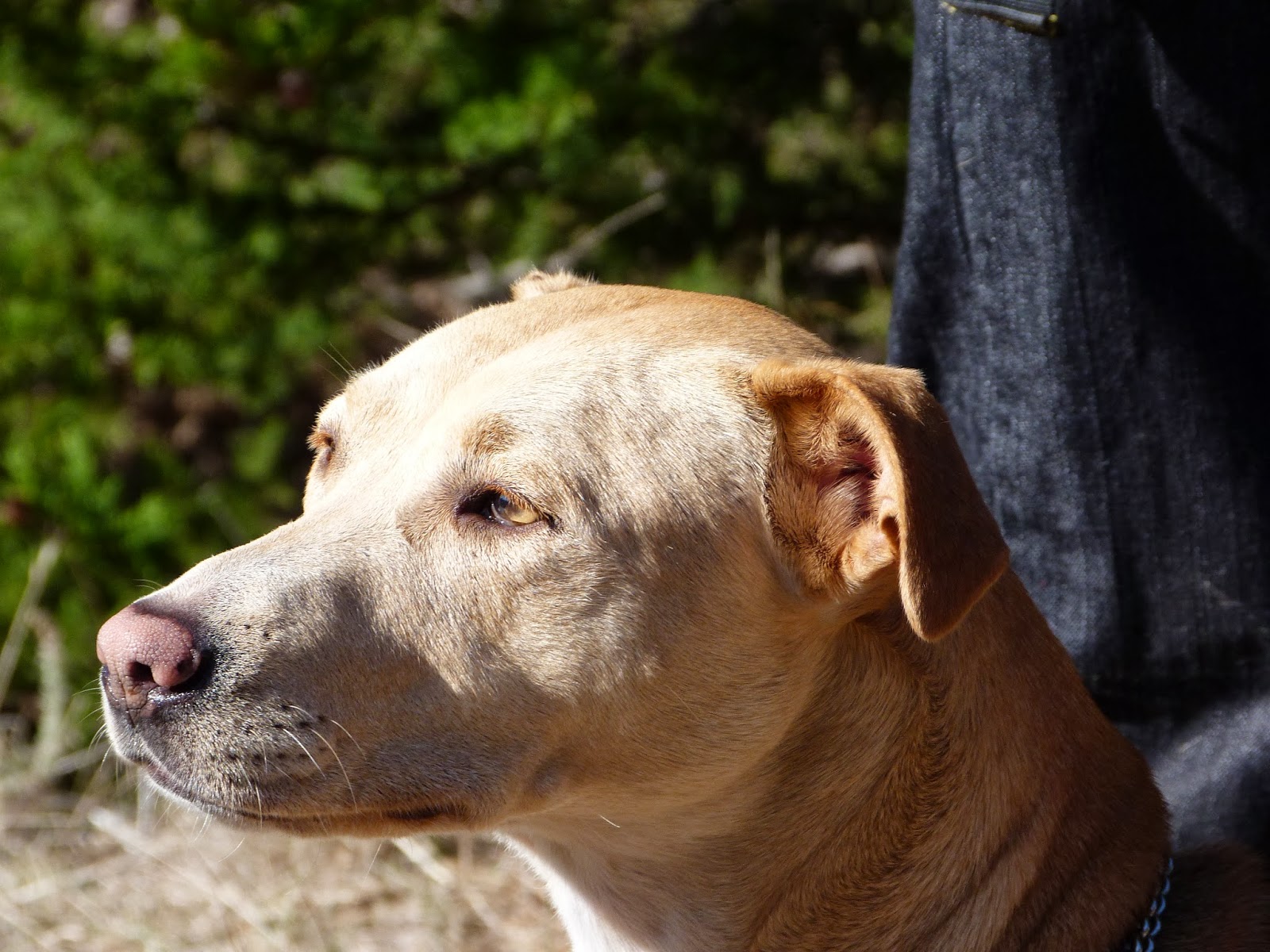 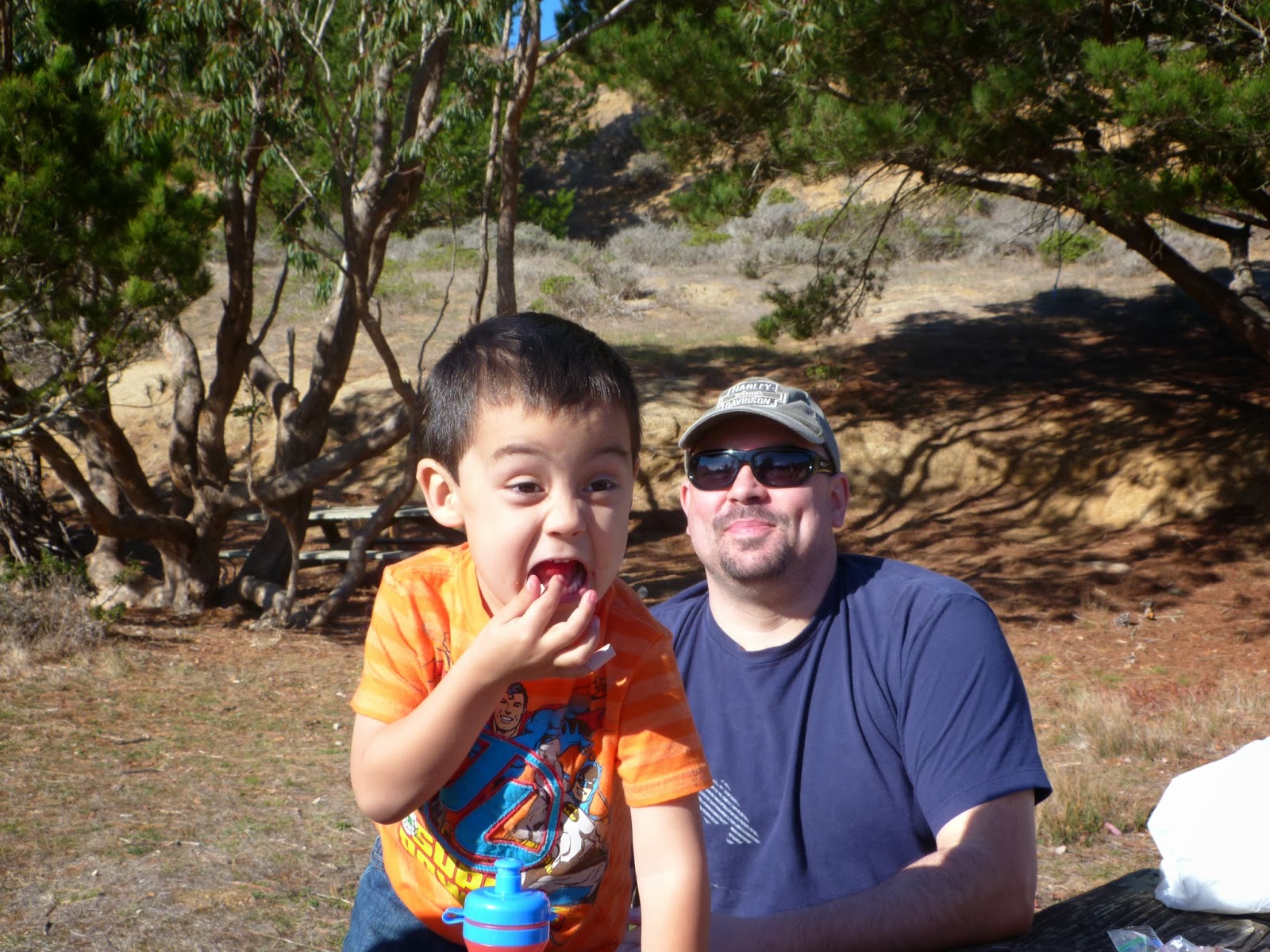 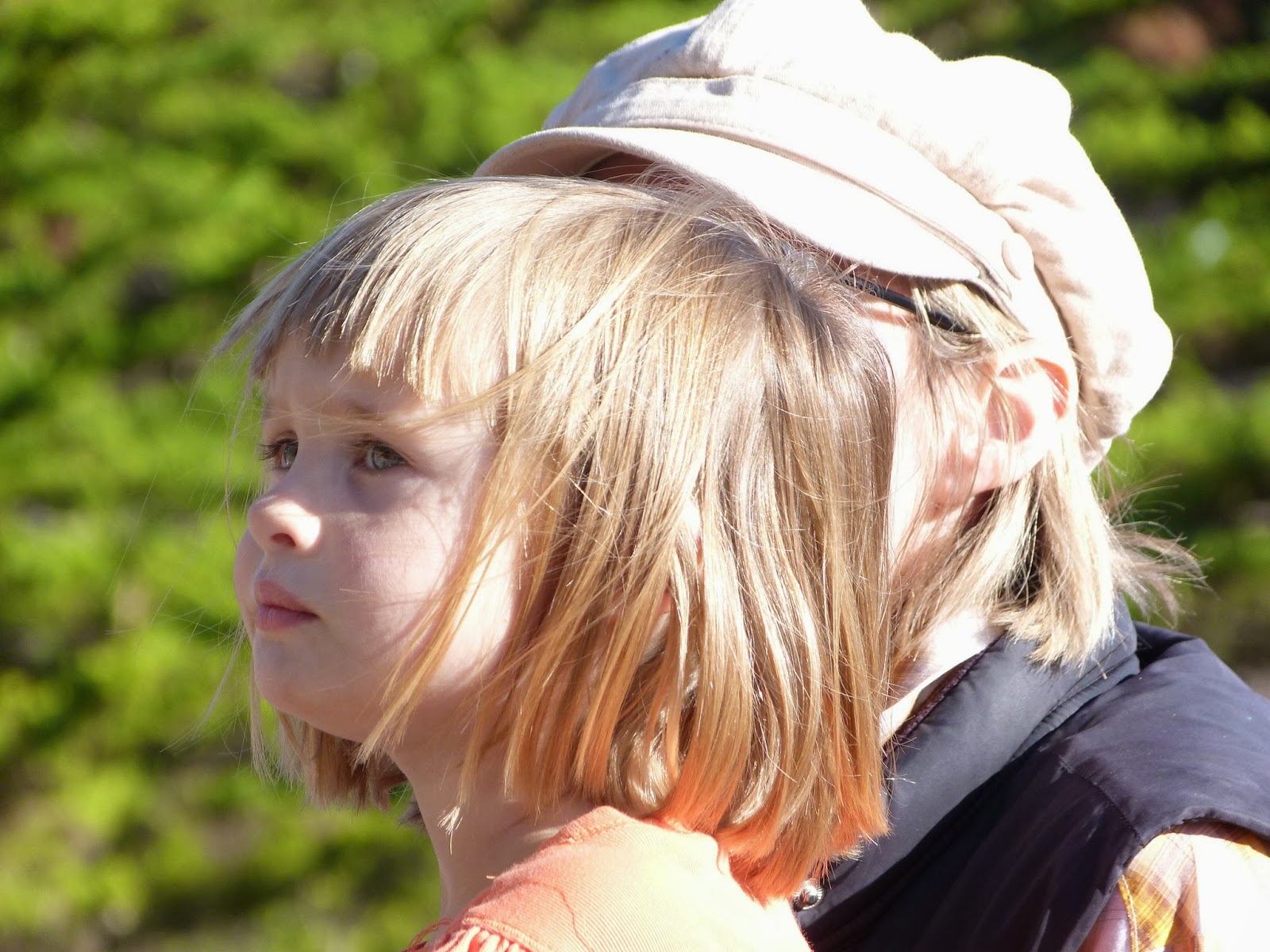 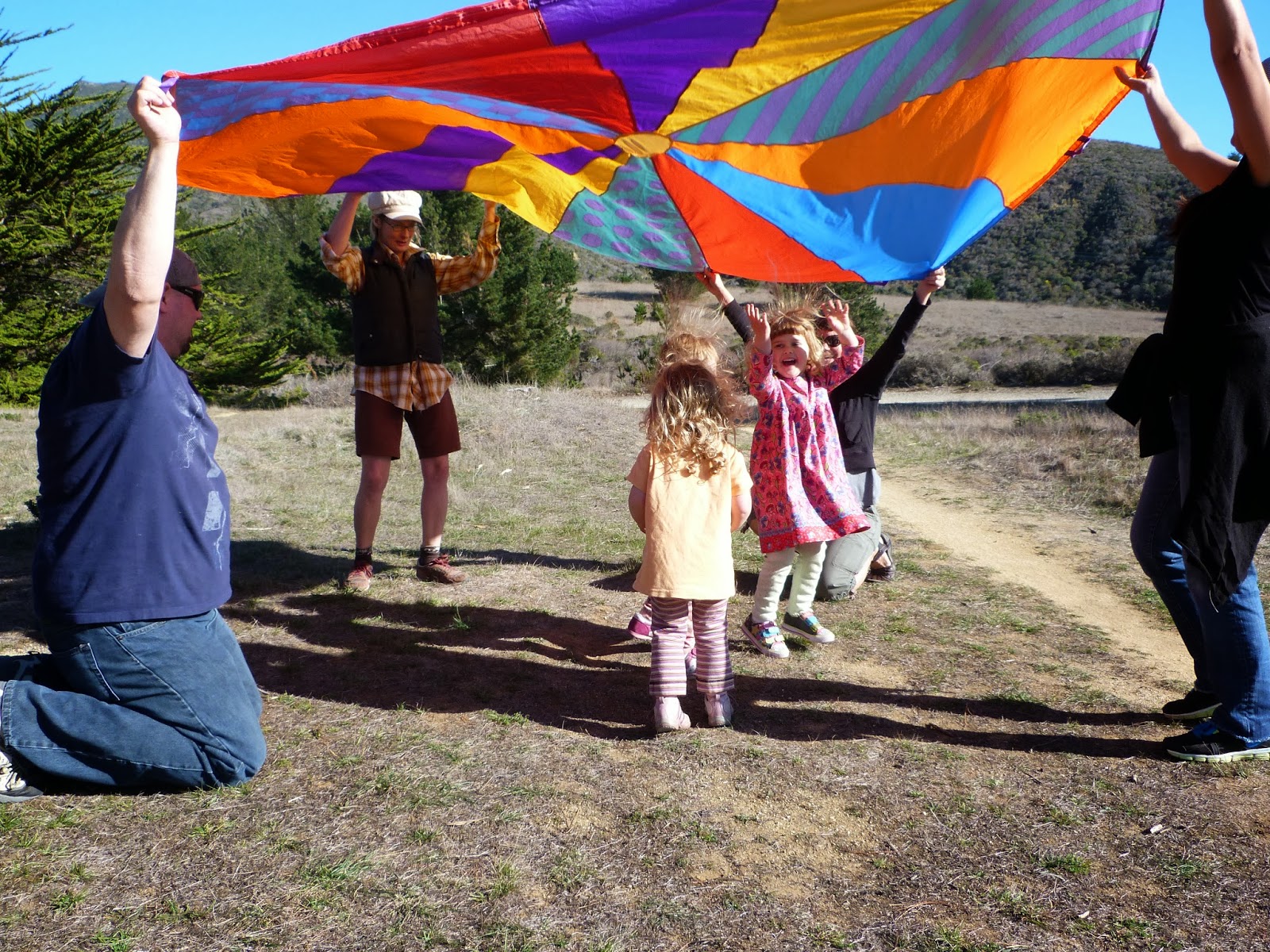 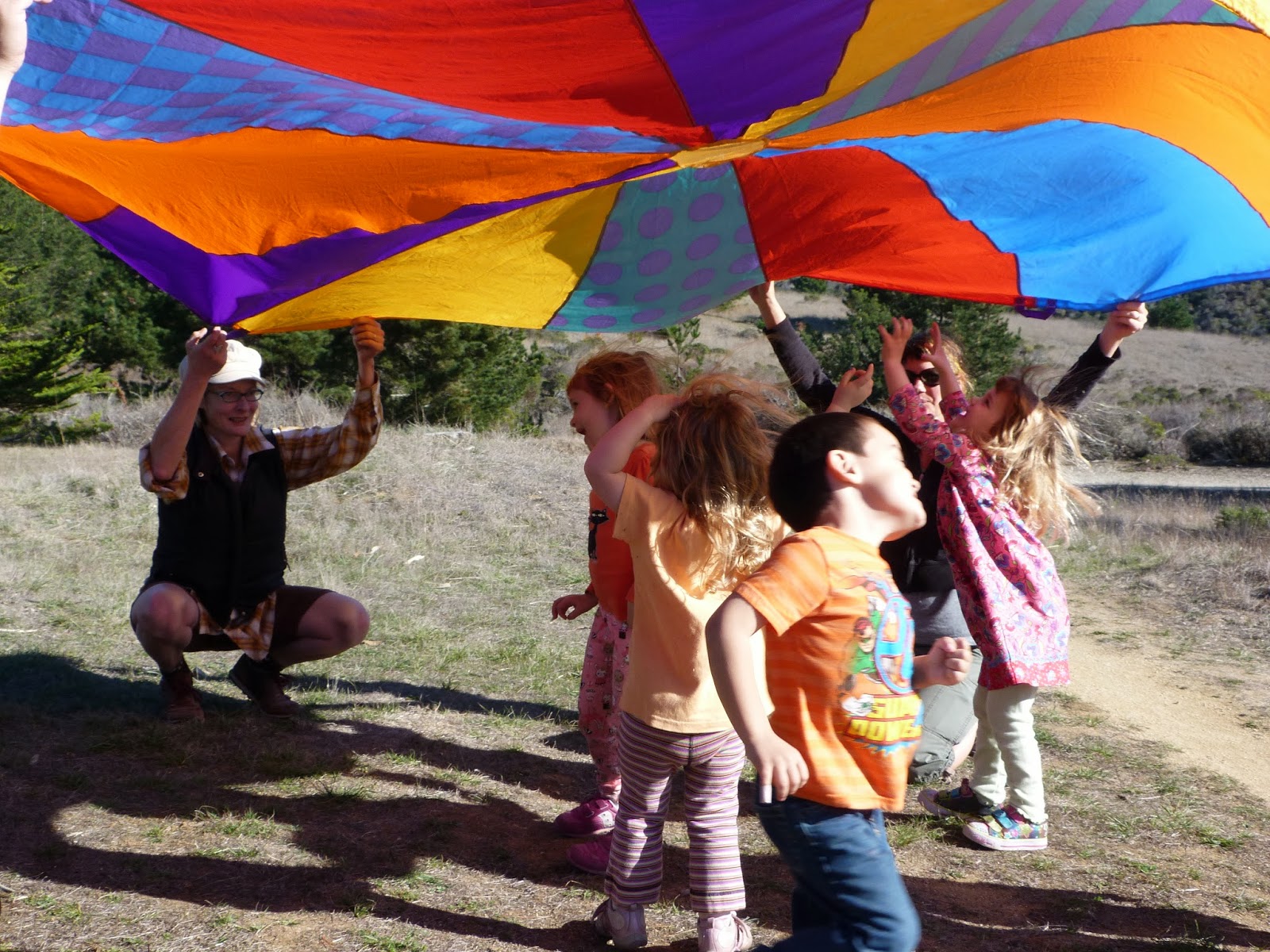 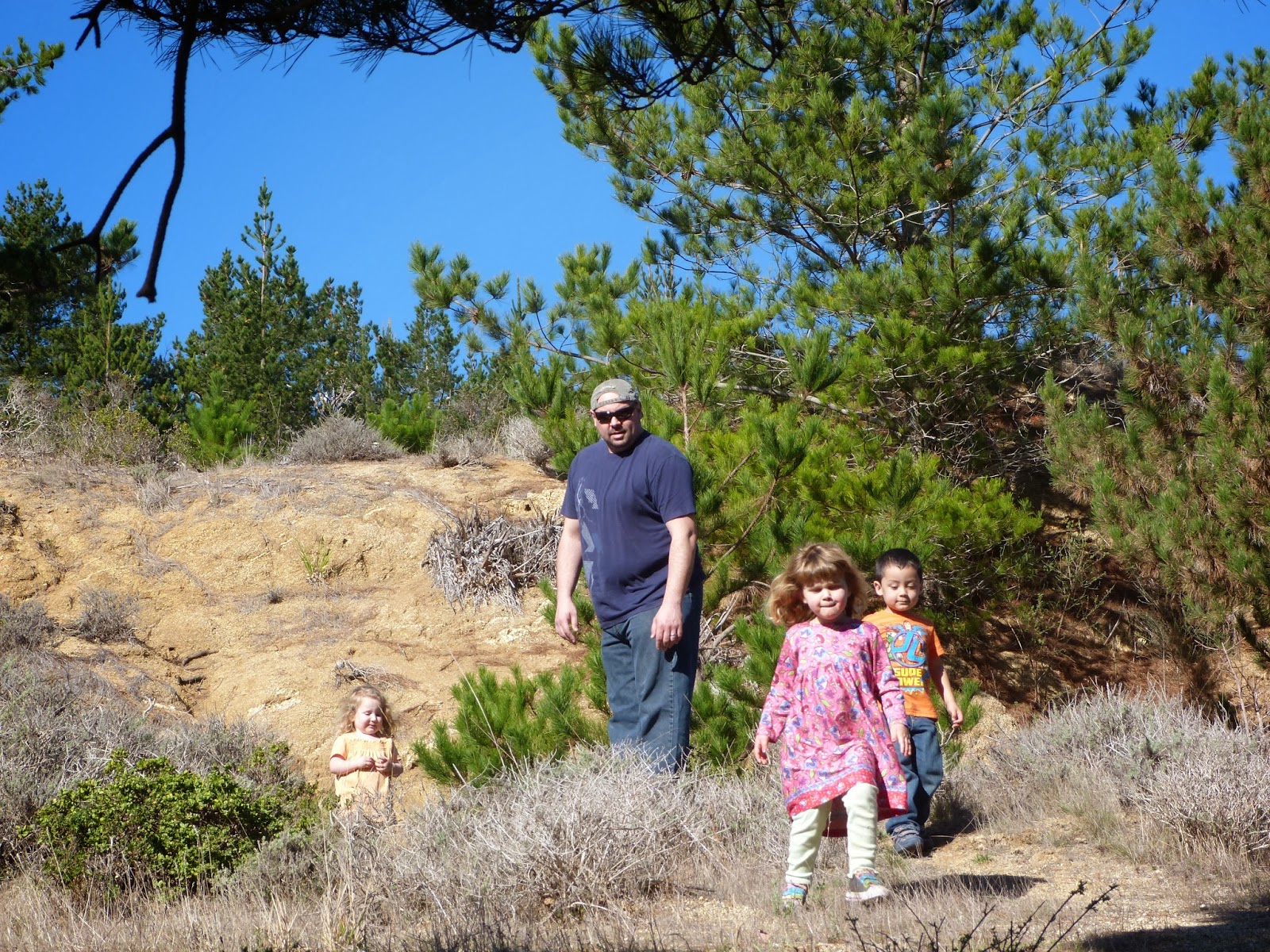 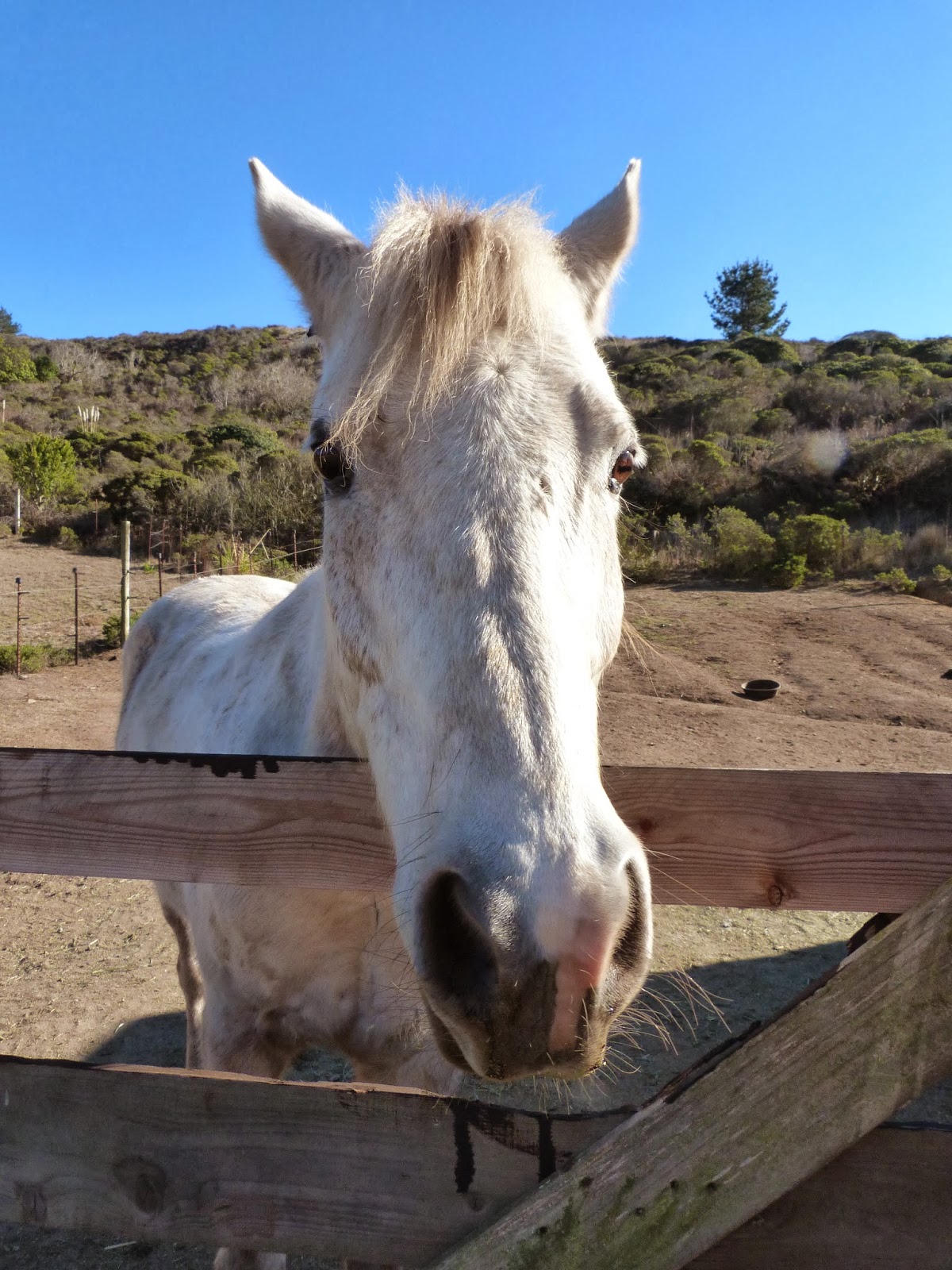 View Larger Map
Posted by Unknown at 8:19 PM No comments: Links to this post