I was always like, “Yeah, Hetch Hetchy—the place where the water in SF comes from.” But I’d never been there, until this summer.

It’s incredible. I expected the quintessential Yosemite, a mashup of nature and mankind, and in a way Hetch Hetchy is, but walking along it’s northern shore was sublime, the kind of feeling that is almost religious, which says a lot for this atheist city slicker. Instead of humans all over the place, there were hundreds of teal colored butterflies, alpine blues, yellow and black swallowtails, and orange butterflies flickering over the rivulets moving down the granite walls of the valley and into the reservoir, a space so blue and flat and pristine, you almost start to plan a secret skinny dipping event for the next full moon. ;-) There are three great possible hikes from the Hetch Hetchy Reservoir, destinations being the dam itself, Wapama Falls, or Rancheria Falls.

THE TODDLER’S HIKE-- O'Shaughnessy Dam
The walk along the top of the dam gives you a feeling of being on the wall of some American castle, and at the far end is a tunnel that a toddler would love to walk through. The dam is an undeniable engineering feat, constructed from 1915 to 1922, and happens to be in a setting so beautiful that John Muir fought tooth and nail to keep it from being built. The view is dazzling, as is the fact that Hetch Hetchy's water travels 167 miles more or less downhill by gravity, and serves more than 2.4 million people with clean drinking water. The tunnel at the far end, where dam meets the valley way, was dynamited out of the rock and it has the feeling of gnomes and magic, dripping with moisture and cooled by wind blowing through it. If you have rain boots for the toddler, bring 'em for stomping in puddles.

THE BIG KID’S HIKE--Wapama Falls (3 miles r/t)
The three-mile round-trip walk from the dam to Wapama Falls is plenty for kids, and you’ll need to bring water, snacks, and a hat with an extra wide brim. (In fact, I was fortunate to have a newborn blanket on me, pinned to my hat to keep sun off my shoulders). The trail winds up and down the valley’s edge on a trail that faces the sunny south, but the shade of oaks and bay laurels keeps you cool in moments, and otherwise you smell the aromatic sage, yerba santa, and the scent of hot granite in the sun.

The round-trip hike to Rancheria Falls is 9 miles (5.4 one-way from the dam), an all-day trip that eluded even my husband and I. We almost made it, maybe halfway where we came to green meadow with purple flowers and ponderosa pines, the wind warm, the place magical. Some people we passed were going to camp there; they had the right idea.

GETTING THERE
It’s about three and a half hours drive to Hetch Hetchy from San Francisco, and basically you go east through the Central Valley and towns like Oakdale, where you can buy big baskets of fruit grown in the local orchards. Hetch Hetchy is located on the northwest corner of Yosemite National Park, which is far less trodden than the main valley, FYI.

STAYING THERE
There is great lodging within a couple miles from each other: camping by a creek with your own “bear box” and flat tent site (Dimond-O Campground), cabins in San Francisco’s own Camp Mather, or deluxe accommodation with a restaurant at the historic Evergreen Lodge. 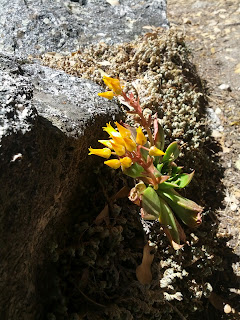 Posted by Unknown at 10:48 AM 2 comments: Links to this post