HIKE ON DOWN TO THE LOCAL OCCUPY MOVEMENT


It has been a chilly week with wind and rain clouds, and so when I saw a posting on a social networking group that asked for hot food to be brought to the Occupy San Francisco encampment, I decided to make some soup and take an urban hike.

With my two-year-old daughter pulling her Red Flyer wagon, loaded with paper bowls, cups, spoons, and a towel or two, and myself carrying a five gallon vat of vegetable soup, we arrived at Justin Herman Plaza, a little nervous, and a little excited.

For two months, I've heard about the Occupy movements across the globe. I've supported them in spirit, but hadn't made the trek to an encampment. I believe in the reasons for the Occupy movement--the non violent protest against Wall Street--and I'm furious about the deregulated capitalism that has caused so many problems in my life, including an imminent foreclosure. I don't know what my financial future will be like, and my child's future is completely blank. I've had lots of excuses as to why I couldn't get down to the local Occupy movement: I've got a toddler, I've got graduate school work, I've got an old mom who needs me more and, frankly, I'm busy. Yes, I'm BUSY. I'M JUST FRICKIN BUSY. And besides, what would I do down there?

Bringing soup was the right thing.

Right away, an activist saw me lugging my pot and offered to carry it, leading me to a central location where I could serve soup (there was a choice to donate my soup to the food tent, but I wanted to dip the ladle in the pot and get to meet some occupiers).

My toddler enjoyed the experience too. She eagerly distributed spoons, and if anyone forgot a spoon, she squawked and waved at them. Finally she turned to me and said, "You too! You too!" which in her language means "Me too! Gimme some soup!" She ate a bowl along with everyone else.

It's funny, but I thought later about a story my mother once told me, about how her parents, who had immigrated with her and my uncle from war-torn Berlin to Long Island, reacted to Senator McCarthy's anti-Communist campaign in the 1950s. "It is like the Nazi regime is starting in America," my grandfather said. His cousin, Peter Yorck, had been hung with piano wire for being involved in the plot to assassinate Hitler. If my grandfather had been caught by the Nazis for his own clandestine activism (he was a spy for the British) he would have been killed. Perhaps my mother would have been killed too. Perhaps I wouldn't have been born.

When my grandparents moved to America to be free from oppression, and learned about what McCarthy was doing, they took action against him as best as they could. My grandmother obtained some anti-McCarthy leaflets, and she took my mother, who was maybe four years old, and went down to the local passenger train station to distribute them.

My mom has faint memories of passing out fliers to commuters who normally rushed to their train, but stopped to see what this little girl was holding up in her hand. 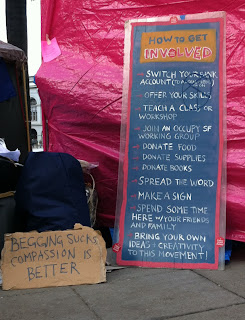 My mother became a Civil Rights activist, then an anti-war activist, and finally a social worker. She likes to say that the childhood experience of passing out leaflets in the busy train station was her first moment of activism. I once thought to myself, Gosh, so Grandma used you? I've come to believe that we have only one life in this lifetime, and we can be silent and make excuses when the government mistreats its people--I've got a small child, I said, and so I shouldn't do anything but bring her to the playground and sing "Ring Around the Rosie"--or we can work to make the world a better world.

Within twenty minutes, all of the soup was gone. I've never met so many thankful, kind people who made it clear how important a cup of hot soup is for morale.

As my kid and I walked through the camp with our empty soup pot, someone called, "Thank you for the soup! Thank you for bringing your kid! We need more children here!" Genevieve raised her own hand up and shouted "Bye bye!" She was all about solidarity. 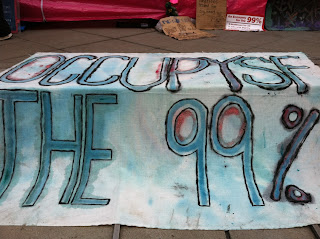 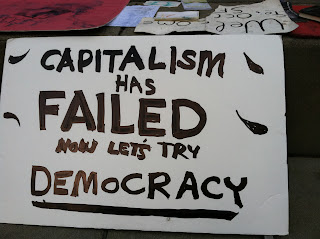 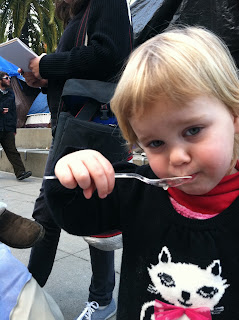 
Cooking Directions
Get the biggest sized pot you have and fill it a little over three-quarters full of water and set it to boil. Toss in the onion, garlic, and oil. Toss in the potatoes and bring to a boil. Reduce to a simmer. Wait a couple minutes, then add carrots. Add the rest of the ingredients in the last twenty minutes. The zucchini and tomatoes will melt down and help create a great broth, but the potatoes will still retain their shape. Total cooking time is about thirty minutes, maybe a hair longer. Taste and see.

Secure the lid with a rolled up kitchen towel, and place in a box; stuff towels in the corners to keep it from slipping about. If you have a wagon, it might fit in there, or you might have to carry it. Bring bowls and/or cups, spoons (not necessary, but nice), and overcome any hesitation to say hello to people.

*
Please spread the word about the OCCUPY Movement...    Let's make a change. 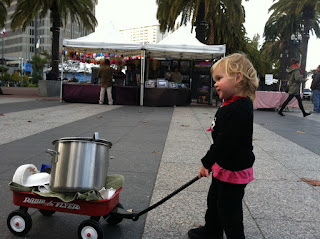 Posted by Unknown at 4:26 PM 2 comments: Links to this post