About fifty people gathered on Sunday, February 17th for the first Hill Babies group walk in 2013. Besides the parents, caregivers, and grandparents present, the kids ranged from one month of age to early teen. We were lucky to have some special guests to point out native flora and fauna: Paul Bouscal, a member San Bruno Mountain Watch, local author Ginny Anderson, and Deirdre Martin, a member of Nature in the City.


I distributed hand-drawn maps and then we set off at our own pace. Saddle Loop Trail is 2.7 miles, but there is a shortcut back to the parking lot where you'd only have walked 1.3 miles.

As ever, these walks are free and for all ages and occur about once a month. To receive postings about the next one, just sign up on this blog. 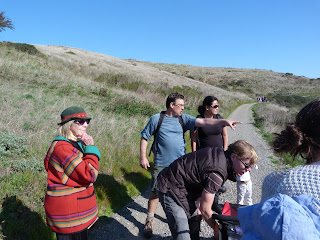 Paul Bouscal from San Bruno Mountain Watch is the animated one above, telling folks about the restoration efforts that've happened here, including the removal of tons of non-native prickly gorse that covered the slopes. 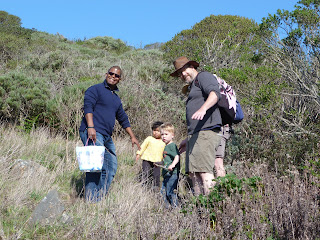 Dads taking their kids into the field to see things up close. There were quite a few dads and kids on their own, marching along, spending some quality time with their kids on a Sunday morning. 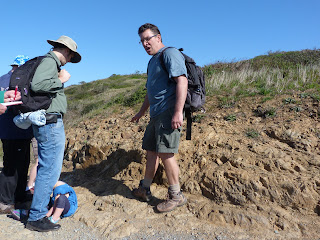 Paul Bouscal explained the geology of the mountain. 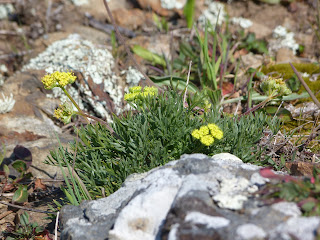 These little flowers are Yellow Hog Fennel, or Lomatium, a member of the carrot and parsnip family. There seems to be medicinal use for it, but too much to write about here. 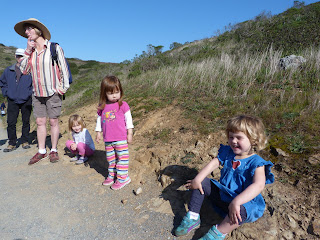 Little girls having a hoot on the gravel. 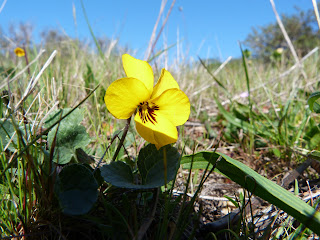 This pretty flower is a native viola called Johnny Jump Up, and it happens to be very important as it's the host plant (food plant) for the Callippe Silverspot butterfly caterpillar. It's also been very difficult to re-introduce to the area in terms of habitat restoration, according to Paul Bouscal. 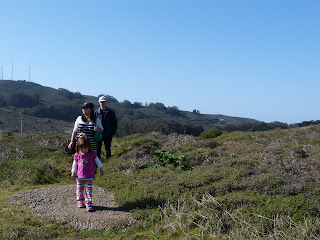 It was a perfect day for everyone, and the little kids often led the way. Amazingly there was barely a tear shed or a tantrum thrown by any of the children---being outside has a calming and restorative effect for children, and parents too. 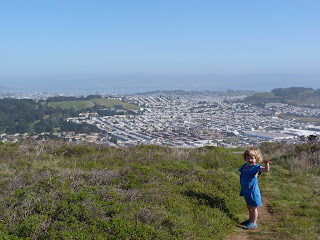 On the north side of Saddle Loop Trail the city of San Francisco is unfolded like a crenellated grey blanket with green outcroppings of hills. In the distance you can see McLaren Park, to the left, and Bayview Hill, to the right, both areas with significant native plants and fantastic trails to bring children on. 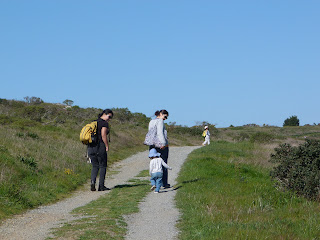 That tiny trooper was doing very well, plugging along uphill on the gentle grade of part of the northern trail. 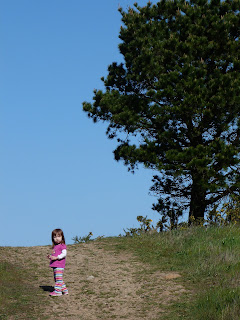 A native Hill Baby en route to the apex from which she will be able to see the blue slash of the Pacific Ocean to her left, and the grey landscape of San Francisco to her right. Only two and a half and already a veteran of Hill Babies' hikes, this little girl never asks to be carried even on the steepest hills. 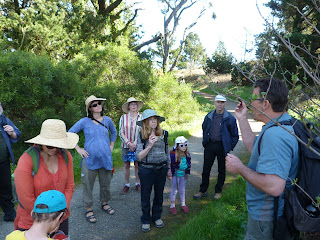 Here Paul Bouscal, from San Bruno Mountain Watch, tells folks about the uses of red elderberry, a coastal type of tree with a fine example growing on the northern trail of Saddle Loop. 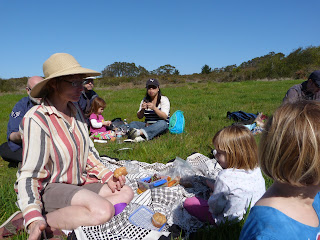 At the end of the hike, some picnicked here, while others picnicked at another site closer to bathrooms. Either way it was a chance to meet people, have the kids engage in open-ended play, and rest for a while. 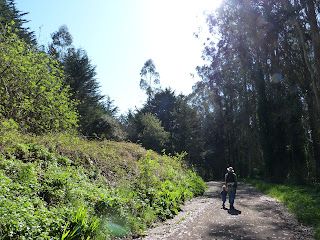 On the final leg back to the parking lot, father and daughter walk together. My husband works full time during the week, so sometimes a walk like this one is his best chance to bond, because as any parent knows dinner and bedtime are not always the most harmonious times of the day. 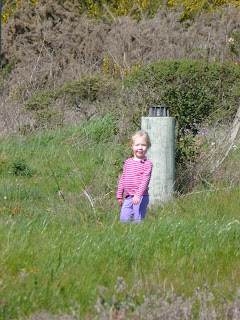 This little nature girl might prefer the sun, grass, and independent exploration to all the Playstations in the world.

Labels: group hike, hiking with children, Saddle Loop Trail, San Bruno Mountain, wildflowers
Newer Posts Older Posts Home
Subscribe to: Posts (Atom)
No city should be too large for a man to walk out of in a morning. ~Cyril Connolly