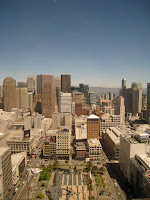 I’ve never had much interest in Union Square until recently, although I grew up in San Francisco. I’ve thought of it as such a frenetic center of consuming activity—not my cup of tea.

When I started my Hill Babies blog and then a column on Examiner.com about walking in The City with children, another mother wrote to tell me about some baby-friendly resources in the vicinity. I’ve discovered Union Square is a still point in the middle of downtown. That and the gold rush era history, plus an invitation to have a drink with a former colleague, drew me back to Union Square. I was pleasantly surprised.

THE BABY FRIENDLY LOO
First things first. Right by the Powell Street BART station are several sumptuous bathrooms for kids and babies in the children’s sections of certain department stores. 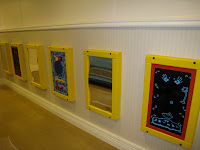 Bloomingdale’s has a semi-private play area just outside the bathroom. Cushioned benches for nursing, a video game for little kids, a ridiculously huge television, and a wall of toys and fun house style mirrors. The baby-changing table is plush.
Nordstrom’s has changing tables and a lounge for nursing. San Francisco Center (near the food court / Bristol Farm) has a family restroom with a kid-sized toilet.
HALLIDIE PLAZA
Hallidie Plaza is the triangular-shaped plaza just outside and upstairs from the Powell Street BART and MUNI station, where the cable cars (http://www.sfcablecar.com/) turnaround. This is the most popular place to catch a cable car. Of course buskers are present en masse; on this most recent visit, I appreciated the music of an acoustic guitarist and two skilled tap dancers. Hallidie Plaza is a great place to people-watch. It’s a convergence of tourists and locals, performers, sidewalk vendors, and street preachers holding big signs.
The history is interesting. The plaza is named for Andrew Smith Hallidie, inventor of the cable car. Check out the ornate streetlight from 1917 with three torches on the top. It is one of many going up Market Street.
Just past the Gap is the entrance to the Flood Building, on 870 Market Street. It is a cool, flat-iron building (with a snubby triangular edge, like an iron), built in 1904 by the son of one of San Francisco’s “Bonanza Kings” (who made his wealth from silver mining in the late 1800s). The foyer is architecturally beautiful in Renaissance Baroque style, and there’s a mini museum of the building’s history. 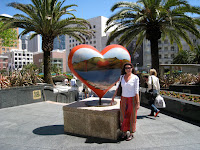 UNION SQUARE
Plazas are great places, period. Kids were running around, people were having drinks, and an Eighties cover band was whooping it up on the center stage. I could sit there a while, rest the feet, listen to tunes, and bask in the sun. There are several places to get coffee drinks and snacks. In the winter there’s an ice skating rink, and in warmer months there’s live music. 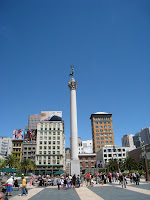 In the middle of Union Square is a tall, granite Corinthian column topped by a virtuous looking, almost angelic sculpture of a woman. She carries a trident in one hand, and a laurel wreath in the other. She is symbolic of the Republic, as her wreath commemorates President McKinley, and her trident symbolizes a naval victory. Look closer and it seems like she modeled during a wet T-shirt contest. The model was Alma de Bretteville, a six feet tall, voluptuous, sought-after woman. Born in 1881, she came from a poor Danish family with aristocratic roots. She studied art in San Francisco and made money by posing nude... and gold digging for rich old men. There’s a fabulous history about her, too much to write here. One last note: she was a benefactress to San Francisco after she became wealthy—the Legion of Honor and National Maritime Museum were projects of hers. Next time I come to Union Square, I am bringing binoculars.
THE WESTIN ST. FRANCIS HOTEL
My friend and I went in here to see a famous clock, and discovered some other interesting things. 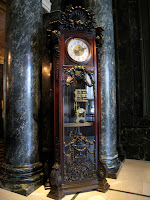 “Meet me under the clock” is a phrase connected with the Magneta Grandfather Clock. It is a 10-foot tall rococo style clock, sort of awkwardly positioned in the corner of the foyer. It was built in 1856 in Vienna, and is the master clock for the entire hotel.
We discovered four things about the hotel. The elevators are fast and have a glass wall with a tremendous view of downtown San Francisco. The Italian Ballroom—sort of hard to find—has a beautiful embossed metal ceiling of Art Nouveau figures. Barack Obama stayed here. When Her Majesty Queen Elizabeth II visited in the early Eighties, her dinner menu included Consommé of Pheasant, Loin of Veal with Morel Mousse, Lobster Terrine with Golden Caviar and Dill Sauce, and Cheese Straws. 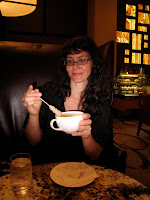 
SOURCES OF INFORMATION
Ø  Melissa Helms. Thank you for the information on kid-friendly resources!

Ø  Various plaques inside the St. Francis Hotel and Flood Building.
Posted by Unknown at 5:45 PM No comments: Links to this post

Labels: cable car, Hallidie Plaza, Union Square
Newer Posts Older Posts Home
Subscribe to: Posts (Atom)
No city should be too large for a man to walk out of in a morning. ~Cyril Connolly