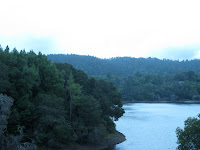 Just before New Year’s eve, my friend Brett and I, with baby Genevieve in sling, ended up at Sawyer Camp Trail alongside the Crystal Springs Reservoir in San Mateo County. It’s probably one of the easiest hikes as it is simply a meandering paved trail that runs alongside the water, one of the prettiest manmade lakes, made pretty by the simple, ironic fact that humans are not allowed to swim, boat, or bathe in its slate blue Hetch Hetchy waters.

If it weren’t for the cyclone fence topped with barbed wire, I could imagine great things, like being in the wilderness. (I wholeheartedly appreciate the lack of boat pollution, or the big summer bodies covered in coconut oil, flounder-swimming and making a racket, scaring the bejeezus out of fish, fowl, and doe.) 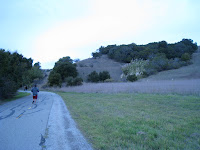 As it was we walked with other joggers and bikers and strollers of babies beside the rusty fence that kept us from the water and the thick forest along the western shores. Deer nibbled grass on both sides of the fence and looked askance at us like the trespassers we were.

Sawyer Camp Trail is 6 miles long, and apparently was once the main wagon trail connecting San Francisco and Half Moon Bay before cars existed. A fellow named Leander Sawyer used to live along here back in the 1800s, and kept a little place with beds for rent and hot meals for wayfaring strangers heading north or south (he was a man of multiple talents, raising cattle and training circus horses on the side). 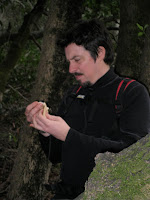 One great aspect to this particular walk is the fact that Brett is in love with mushrooms. He was like a hog on the scent of a wily truffle, scrabbling through rusty barbed wire, jumping forward to grab a chanterelle that sadly turned out to be curled orange peels someone dropped. He knows his stuff, he read his mycological guides by David Arora, he attends fungus festivals, and one of his best friends has taught him much in the ways of mushrooms and the careful picking of them. (In fact, when Brett showed up at my house before the hike he gifted me a big bag of dirt-covered chanterelles that he found in the Oakland hills.) 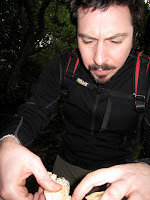 Brett identified a plethora of milk caps alongside the Sawyer Camp Trail “but they were the poisonous ones,” he tells me. “You can tell this by breaking off a piece and seeing what color latex it exudes. The poisonous ones start by exuding a white latex, but this turns yellow after a few moments. I believe the common name is yellow-staining milk cap. The genus name for milk caps is Lactarius.” Sure enough beads of milk formed on the mushroom where the gills broke in Brett’s hands.

“I think we also saw a member of the Suillus genus (very spongy on the bottom with holes instead of gills),” Brett continues. “Most of them are also really slimy on top. We probably also saw a few russulas, but I don't remember the exact species.” 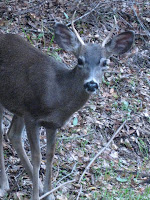 It was a fun to walk after a recent rain with a mycological enthusiast; I see fallen leaves and big-eyed deer, the baby sees fuzzy shapes of bicyclists retreating into the distance, and Brett sees the fruits of the mycelium-webbed soil.

Brett, the baby, and I didn’t get too far, maybe a mile and a half out max, what with evening plans and an unavoidable late start to the day. Next time I return to Sawyer Camp I want to make the three miles to the Jepson Laurel, the biggest darn laurel tree in all California, I’m told. It’s a whopping 600 years old; it was a seedling when the Plague continued to ravage Europe.

And if it’s a rainy, misty day, I just might keep a look out for mushrooms thanks to Brett's mycological teaching.

--Proceed over the Crystal Springs Dam

Victuals: There are no stores here. Pack it in and out.

Bathrooms:  Port-o-potties are located at the start and subsequent points on the trail. 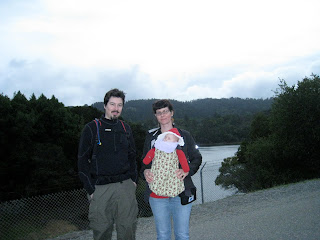 Posted by Unknown at 11:20 AM No comments: Links to this post

Labels: Bay Area, children, hiking, mushroom hunting, San Mateo County, Sawyer Camp Trail
Newer Posts Older Posts Home
Subscribe to: Posts (Atom)
No city should be too large for a man to walk out of in a morning. ~Cyril Connolly