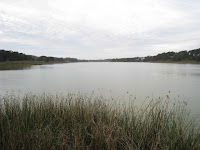 At the southernmost point of Lake Merced in San Francisco is a bridge connecting one side to the other. I decided to explore the bridge, see what I could see, and walk around the bottom part of the lake. It was near sunset and I was tired, so this was more of a short reconnoitering than a hike.
The first sounds I heard upon leaving the bubble of my car: gunshots and honking cars. Apparently there’s a gun range, and endless cars zooming down the thoroughfares on all shores. 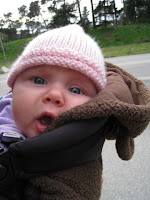 Undaunted, I hoisted the baby into a sling and looked for nature.
The Baby Factor
Gunshots and racing cars aside, this is a lovely place to walk your baby. The lake is gorgeous, the air is crisp and marine, and the trees—what there are—are tall and green. A paved path meanders with the perimeter of the lake, roughly 4.5 miles. There are picnic tables, grassy areas (not just the three golf courses), barbeque pits, plenty of parking spaces, and public restrooms.
But at the bottom line, gunshots and traffic are a drag (Note: Pacific Rod and Gun Club releases its racketing volley on Wednesday, Saturday, and Sunday). 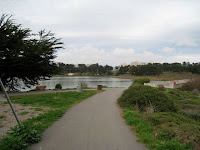 The Walk
Nature signs directed me to look for white-crowned sparrows in the coyote brush growing along the banks of the lake. I couldn’t see them. I listened for their “distinctive song, ‘I-I-I gotta go wee wee now!’” I really would’ve liked to hear that song, but there was a fusillade in the background. 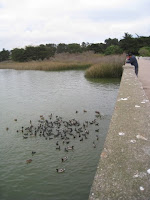 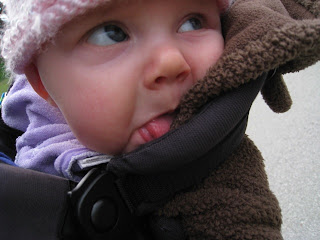 Posted by Unknown at 9:33 AM No comments:

Labels: hiking with children, Lake Merced, urban hike
Newer Posts Older Posts Home
Subscribe to: Posts (Atom)
No city should be too large for a man to walk out of in a morning. ~Cyril Connolly